TEHRAN (defapress) – Iranian doctor and scientist Majid Taheri arrived in Tehran on Monday morning after serving 16 months in a US prison.
News ID: 81276 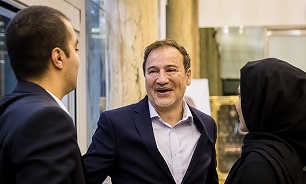 Speaking to reporters upon his arrival at the Imam Khomeini International Airport, Taheri said he had been imprisoned in the US on “bogus and unfair” charges.

He also expressed gratitude to Iranian Foreign Minister Mohammad Javad Zarif and other officials for pursuing his release.

“I was assisting a group in the University of Tehran with the production of an anti-cancer human vaccine, particularly for women. As a physician, I wanted to do my professional, moral and national duty to help fellow human beings and fellow citizens. Unfortunately, they (US) leveled unfair and bogus accusations against me and I served one year and six months in prison, but I was released with the help of God and the Iranian officials,” Taheri said.

Iran has stressed no direct talks had taken place between the Islamic Republic and the United States over the release, saying the process was facilitated by the Swiss Embassy.

In an interview with the Islamic Republic News Agency (IRNA) on Sunday, Iranian Foreign Ministry spokesman Seyed Abbas Mousavi said, “This... was carried out with the help of the Swiss government and, therefore, it is necessary to thank the government of Switzerland for its help.”

Emphasizing that the Swiss diplomats were responsible for talks with the US government, the spokesman emphasized, “There has been no direct negotiations between the Islamic Republic of Iran and the government of the United States.”