Baghdad gathering turning into referendum on expulsion of US

TEHRAN (Defapress) - Hundreds of Thousands of people in the Iraqi capital of Baghdad have gathered in Tahrir square to mark Resistance martyrs and express their voice for the expulsion of US troops from the country.
News ID: 82840 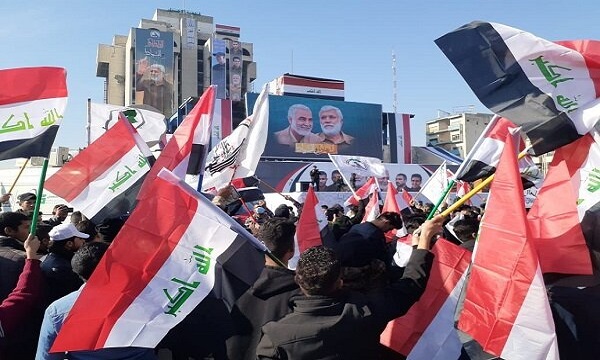 Concurrent with the 1st anniversary of the assassination of former IRGC Quds Force Commander Lt. Gen. Qasem Soleimani and deputy PMU Abu Mahdi al-Muhandis by US terrorist forces at Baghdad International Airport, people of Iraq have gathered in the capital's main square to mark the event.

Similar gatherings are also being held in other Iraqi cities.

Hailing the services and sacrifices of the Resistance movement in the fight against terrorism in Iraq, protestors also are asking for the expulsion of foreign troops from the country, considering such forces as the main reason for instability in Iraq.

Not long after the US act of terror in assassinating the top military commanders, the Iraqi Parliament adopted a motion that asked for a full withdrawal of US troops from Iraq.

Iran and other countries of the Resistance Front have underscored the need for full withdrawal of American forces from the region.

Tehran has highlighted that the expulsion of the US will be the 'harsh revenge' that it has vowed to take in response to the assassination of its top commander.