Nasrallah urges US allies to reconsider their assessments

TEHRAN (Defapress) - Hezbollah Secretary General Sayyed Hasan Nasrallah said that US allies should have a reconsideration in their assessments.
News ID: 83165 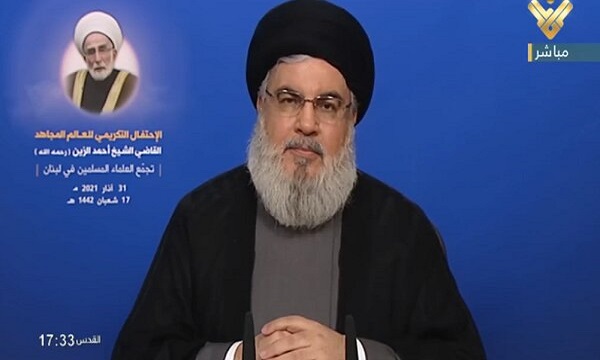 Hezbollah Secretary General Sayyed Hasan Nasrallah stressed on Wednesday that the recent Saudi offer to reach a ceasefire agreement with Yemen’s Ansarullah is a mere deception, emphasizing that the Yemeni command and Sayyed Abdul-Malik Badreddin Al- Houthi may never accept it.

Addressing the Association of Muslim Scholars’ celebration honoring the late cleric Sheikh Ahmad Al-Zein, Sayyed Nasrallah pointed out that the Saudis want to obtain through deception what they failed to gain on the battlefield.

Saudi wants to reach a ceasefire and keep all the other forms of the war on Yemen, according to Sayyed Nasrallah who added that the Saudi blockade on Sanaa airport as well as the seaports and borders prevents the inflow of the medical and foodstuffs, and thus force the Yemenis to accept solutions on the basis of such pressures.

Sayyed Nasrallah emphasized that humanitarian and military solutions must be achieved simultaneously, adding that holding talks during the blockade is completely rejected.

Hezbollah Secretary General highlighted the vicious propaganda which claims that Saudi wants to halt the war on Yemen and that Ansarullah movement rejects the ceasefire offer because it wants to link the Yemeni file to the Iranian nuclear issue.

Sayyed Nasrallah pointed out that the Yemeni forces have developed their military capabilities and engaged in major attacks waged in the context of defending Yemen in face of the ongoing Saudi aggression.

‘Deal of the Century’

Hezbollah leader indicated that the Palestinian steadfastness inspires hope, adding that it has frustrated the US scheme of the ‘Deal of the Century’.

Sayyed Nasrallah stressed that the deal, which was established by the Trump-Netanyahu-MbS tripartite, is no longer mentioned in the political discourse.

According to Sayyed Nasrallah, Biden’s administration can never view the Palestinian cause from Trump’s perspective, noting that it just needed steadfastness and time to foil the US scheme.

Sayyed Nasrallah highlighted Netanyahu’s political crisis, considering that the results of the Israeli elections indicate an unprecedented leadership deadlock in the entity.

Hezbollah Secretary General stressed that the Israeli threats, as well as military maneuvers, reflect the enemy’s worries, adding that those concerns are justifiable because the axis of resistance is dramatically developing its capabilities.

“The Israelis threaten to wage wars; however, they are afraid of them.”

Sayyed Nasrallah stressed that the axis of resistance surpassed the hardest period in its history in reference to the latest decade, adding that the resistance alliance will identify the future of the region.

Elsewhere in his remarks, Nasrallah invited all to think deeper about the sentence “America is declining”; a remark that was made by Leader of Islamic Revolution Ayatollah Seyyed Ali Khamenei. The path of America is decline and collapse while the path of the Resistance is upward, Hezbollah head added.

Iran will not give in

Iran did not give in under most severe sanctions and threats of war and this will never happen now, he said, adding that Iran is in the stage of going through sanctions and it has proved its capability.

Addressing the Lebanese nation and internal issues, Nasrallah said “We are not in a stage of disappointment and there are serious efforts underway to solve problems with cooperation.” He called on US allies in the country to reconsider their assessments of America and it would be better for them to have this reconsideration today than tomorrow.