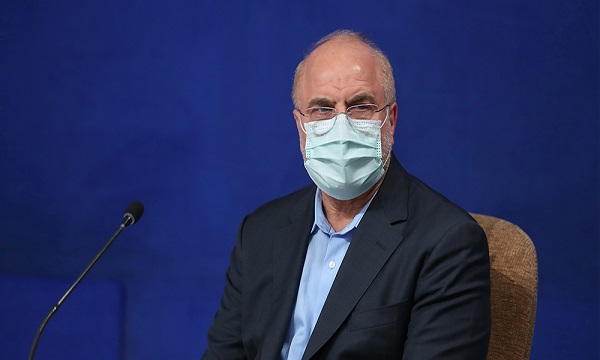 During the telephone conversation on Sunday, Iranian and Lebanese parliament speakers discussed the recent developments in Palestine and holy Al-Quds.

While congratulating Eid al-Fitr, which marks the end of fasting month of Ramadan, to his Lebanese counterpart, Iranian Parliament Speaker Ghalibaf pointed to the recent crimes committed by the Zionist regime in attacking Gaza and Al-Quds and stated that Islamic Republic of Iran strongly condemns the recent crimes of Zionists in invading Gaza and killing of innocent Palestinian children and women as well as bombing of healthcare and medical centers.

Expressing its disgust and abhorrence with these inhumane crimes, Ghalibaf said Islamic Republic of Iran strongly condemns the moves taken by child-killing Zionist regime in preventing the provision of medical assistance to the wounded Palestinians, which is considered a war crime, and calls on parliaments of Islamic countries and international organizations to throw their weight behind the oppressed Palestinian people.

Iranian Parliament Speaker then praised the role of Palestinian resistance and Resistance Front in the region in countering the aggression and expansionist actions of the fake Israeli regime and added that Zionists only understand the language of power and resistance, so that in absence of the Resistance movement, they (Zionist regime) would shamelessly continue their genocide in Palestine.

Lebanese Parliament Speaker, for his turn, pointed to the crimes of Zionist regime in the recent days against the oppressed Palestinians and stated, “What is happening today is no longer a war between the Zionist regime and Arab countries, but a military war with the people of Gaza on the one hand and war of Palestinian people inside the occupied territories with the usurper regime of Israel on the other hand.”