TEHRAN (Defapress) - Mehdi Sobhani, the new ambassador of the Islamic Republic of Iran to Syria presented his credentials to President Bashar al-Assad during a meeting in Damascus Sunday.
News ID: 83448 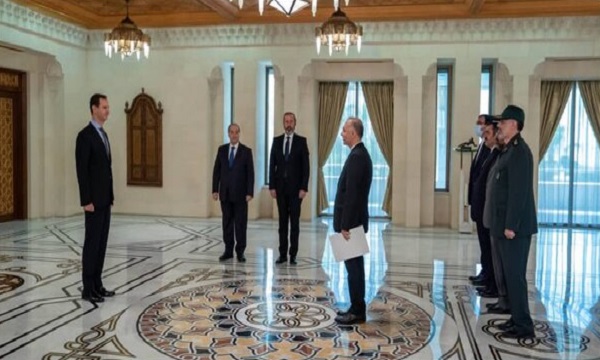 The new ambassador of the Islamic Republic of Iran to Syria, Mehdi Sobhani, visited Bashar al-Assad today (Sunday) at Al-Shaab Palace and presented his credentials to him.

According to the official Syrian news agency (SANA), during the meeting, Bashar al-Assad expressed wished success for Sobhani during his mission.

The meeting was also attended by Foreign and Expatriates Minister, Fayssal Mikdad, and Minister of Presidential Affairs, Mansour Azzam, who attended the ceremony of receiving credentials.

Mehdi Sobhani, former director-general of the Foreign Ministry's Strategic Planning and Monitoring Office, was appointed as Iran's new ambassador to Damascus on May 9, replacing Torkabadi.

He has also previously served as Consul General of the Islamic Republic of Iran in Karachi, Pakistan, Deputy Director-General for West Asia Affairs at the Ministry of Foreign Affairs, and Deputy Ambassador to Turkmenistan and Ukraine.

Sobhani has a PhD in International Relations from the University of Tehran and is a veteran who was disabled during the Iraqi-imposed war on Iran between 1980-88.