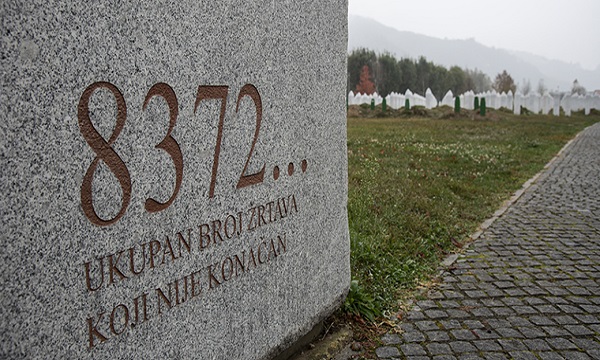 The minister sent a message to a ceremony commemorating the 26th anniversary of the Srebrenica genocide. The Foreign Ministry’s special representative Ebrahim Taherianfard read the message in the ceremony on Sunday.

“Srebrenica genocide is a deep wound in the conscience of the humanity and women and mothers of Srebrenica are still asking for truth and justice,” Zarif said.

He also took the opportunity to salute the high spirit of the martyrs who fall victims to the horrific crimes in the city and expressed sympathy and solidarity with the government and people of Bosnia and Herzegovina, especially their bereaved families, according to IRNA.

He also stressed in his message that "the Islamic Republic of Iran is proud to have stood by the oppressed people of Bosnia and Herzegovina since the beginning of its independence and never hesitated to offer assistance to the nation and still remains committed to supporting the independence, territorial integrity and peaceful coexistence of all ethnic groups in Bosnia and Herzegovina.

The events of July 1995 are one of the darkest chapters in the contemporary history of humanity, although this incident should not be the source of hatred between nations, but at the same time it should never be forgotten, he added.

Expressing his condolences to the families of the victims of Srebrenica who, he said, have worked tirelessly for twenty-six years to seek justice.

The funeral of 19 Muslim victims of the 1995 massacre, whose identities were determined by specialized tests, was attended by survivors and thousands of citizens of Srebrenica and other parts of Bosnia and Herzegovina, as well as representatives of foreign countries at the Potocari Cemetery.