TEHRAN (Defapress) - A large number of foreign officials have arrived in Tehran to attend the inauguration ceremony of President Ebrahim Raeisi amid the coronavirus pandemic; the big event carries an important message.
News ID: 83660 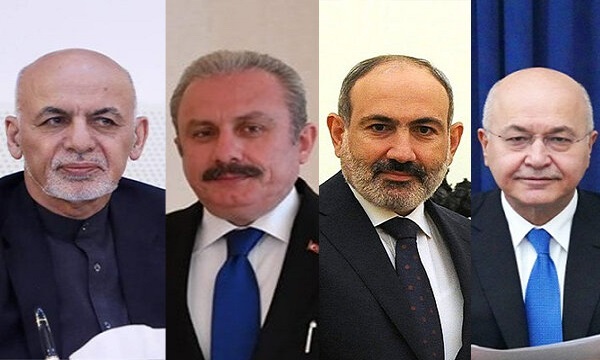 Tehran has become a hub for foreign officials from across the world despite the Covid-19 pandemic.

After the election of Seyyed Ebrahim Raeisi as the new president of Iran, some Western media and power centers in the West tried to get their message across claiming that with Raeisi in power Iran's foreign policy would hit a dead end.

Even over the past few days, the Israelis with the help of their western allies tried to hinder the attendance of European delegation in Tehran with the pre-planned scenario of incidents with tankers in the Persian Gulf and the Sea of ​​Oman, and even threatened them not to come to Iran.

Prior to that, the Western powers used to question the fairness of the Iranian election that led to Raeisi's victory and tried hard to picture Raeisi as pursuing a hardliner foreign policy, followed by threatening Tehran with intensifying Trump-era Maximum Pressure Campaign and tightening the economic sanctions.

This is while some Zionist and Western media outlets are still seeking to squeeze Raeisi's foreign policy and sideline the new government in Iran with escalating tensions around Iran.

However, the presence of a large number of foreign officials who are in Tehran today to attend the inauguration ceremony of President Ebrahim Raeisi despite the coronavirus pandemic restrictions showed that Tehran's engagement with different countries around the world is based on securing Iran's national interests. The event also shows that focusing the foreign policy on expanding economic and political relations is one of the main goals of Iran's new government.

Under the Coronavirus pandemic, it was natural for some leaders and presidents of certain countries, including the presidents of Pakistan, China and Russia, not to be present in Tehran and instead they have apologized and sent a special envoy. Anyway compared to the previous inauguration in Iran the number and the level of attendees at the inauguration of President Raeisi is much higher.

All in all, diplomacy and engagement with might and considering Iran as a powerful state, as well as expanding relations based on the principle of good neighborliness and the continuation of the path of Resistance discourse are among the most important principles that are going to be pursued by Raeisi's administration.