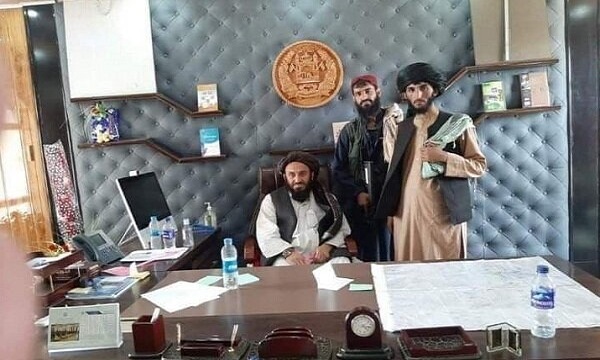 The group’s leadership, surrounded by dozens of armed fighters, addressed the media from the country’s seat of power.

Meanwhile, a Taliban spokesman told Al-Jazeera those who worked with the West-backed government and military will be offered amnesty.

Afghan President Ashraf Ghani said he left the country in order to avoid bloodshed, as the Taliban entered the presidential palace in Kabul, Al-Jazeera reported.

Ghani left in order to avoid clashes with the Taliban that would endanger millions of Kabul residents, he said in a Facebook post – his first comments since leaving the country.

He did not disclose details on his current location.

The US Embassy in Afghanistan has issued a security alert, saying there have been reports of Kabul Airport coming under fire, Sputnik reported.

"The security situation in Kabul is changing quickly and the situation at the airport is deteriorating rapidly. There are reports of the airport taking fire and we are instructing US citizens to shelter in place. The US Embassy in Afghanistan has suspended consular operations effective immediately. Do not come to the Embassy or airport at this time".

Following the departure of Ashraf Ghani from the country, the Taliban ordered its forces to enter Kabul, issuing a statement.

President Ashraf Ghani has left Afghanistan as Taliban closes in on Kabul, according to the country’s top peace negotiator Abdullah Abdullah.

Kabul Airport is reportedly besieged by Taliban forces and all flights from and to the airport are suspended.

Suhail Shaheen, the international media spokesman for the Taliban, said the group expects a peaceful transition of power in the next few days, Al-Jazeera reported.

“We assure the people, particularly in the city of Kabul, that their properties, their lives are safe,” the spokesman said in an interview with the BBC.

“Our leadership had instructed our forces to remain at the gates of Kabul, not to enter the city.

“We are awaiting a peaceful transfer of power,” he said, adding the Taliban expected that to happen in a matter of days.

Some reports indicate that the Taliban delegation, which was in Doha for peace talks, has reportedly left for Kabul to finalize power transfer talks in Afghanistan.

Al-Arabiya, meanwhile, quoted sources as saying that a Taliban delegation had begun talks inside the Afghan presidential palace for the unconditional surrender of the Afghan government.

According to Al-Jazeera, the Taliban and Afghan government officials are in negotiations for a peaceful transfer of power after fighters encircled the capital Kabul.

Afghan media report that the transfer of power will take place today.

Germany’s army is sending A400M transport aircraft to Kabul with 30 paratroopers each on board to evacuate embassy staff and their Afghan helpers as Taliban fighters surround the Afghan capital, Bild am Sonntag reported.

The Sunday paper cited unspecified sources as saying the planes would shuttle to a nearby hub, likely the Uzbek capital Tashkent, for onward charter flights.

A defence ministry spokesman said that an evacuation mission had been prepared through the night with the greatest urgency, but he declined to comment further on the newspaper report.

Pope Francis has called for dialogue to end the conflict in Afghanistan so its people can live in peace, security and reciprocal respect, Al-Jazeera reported.

“I join in the unanimous worry about the situation in Afghanistan. I ask you to pray along with me to the God of peace so that the din of weapons ends and that solutions can be found around a table of dialogue,” he said to pilgrims and tourists in St Peter’s Square.

Jalali likely to be head of Afghanistan interim government

Ali Ahmad Jalali, former Interior Minister of Afghanistan and former Afghan ambassador to Germany has arrived in Kabul and is set to be the head of the interim government, Al-Mayadeen reported.

According to unofficial sources, Ashraf Ghani has left Afghanistan and official news will be announced soon.

UK parliament to be recalled next week to discuss Afghanistan

The British parliament will be recalled from its summer recess next week to discuss the situation in Afghanistan, Sky News reported.

A source close to President Ashraf Ghani has denied reports that he has fled the country, saying the president spent most of the morning in the garden of his residence in the Presidential Palace with the first lady, Al-Jazeera reported.

Russia is working with other countries to hold an emergency UN Security Council meeting on Afghanistan as the Taliban completes its military takeover of the country, foreign ministry official Zamir Kabulov told Russian news agencies.

“We are working on this,” Kabulov said, adding that the meeting will take place

Abdul Sattar Mirzakwal, Afghanistan's acting Minister of Interior Affairs said the city of Kabul would not be attacked and the transfer of power would take place peacefully.

He added that the security forces are in charge of protecting Kabul.

This is while Al-Jazeera reported that Denmark had relocated staff from its embassy in the Afghan capital of Kabul to the airport.

As they advanced rapidly toward Kabul, the Taliban claimed control of Bagram Prison, located at Bagram Air Base, and the prisoners were released.

Taliban spokesperson Zabihullah Mujahid in a tweet wrote that an important prison at Bagram Airport came under Taliban control.

The prisoners were released from Bagram Prison and taken to a safe place, he added.

As Taliban forces enter the city of Kabul, reports indicate that a plane has been deployed to transfer Afghan President Ashraf Ghani.

Afghan media reported that the speaker of the Afghan parliament and a number of political party leaders had left Kabul for Pakistan.

Taliban says Kabul will not be taken by force

The Taliban have released a statement online saying they have instructed their forces not to cross the gates of Kabul and take the city by force.

They also released another statement trying to reassure banks, merchants and other entrepreneurs that their property, money and institutions will not be disturbed by the armed group.

Despite the online assurances, people continue to leave the city streets and try to find ways to head home.

The correspondent of the IRIB based in Kabul announced a moment ago that the people of Kabul are anxious and all schools have been closed.

Currently, calls are difficult to make and shops are closed.

According to eyewitnesses, the convoy of Afghan security forces moved to the west of Kabul to be deployed in the western security posts of the city.

There are unconfirmed reports of clashes between the Taliban and Afghan forces in the town of Paghman in western Kabul province.

The Taliban have begun entering the Afghan capital Kabul from all sides, the Afghan interior ministry said, Al-Jazeera reported.

A Taliban leader in Doha said the group ordered its fighters to refrain from violence, allow safe passage to anyone seeking to leave and request women to head to protected areas.

US starts evacuating diplomats from embassy in Kabul

CNN reported that the US is expediting its evacuation efforts as the Taliban have begun entering the capital, Kabul, from all sides.

An Afghan official and the Taliban say the militants have seized the provincial capital of Khost, according to Al-Jazeera.

A provincial council member, speaking on the condition of anonymity, confirmed the capture to the Associated Press.

It leaves Afghanistan’s central government in control of just Kabul and five other provincial capitals out of the country’s 34.

Pakistan has closed the Torkham crossing with Afghanistan after the Taliban’s takeover of the Afghan side of the border, Pakistan Interior Minister Sheikh Rashid Ahmad said.

People in Kabul rush to banks to withdraw money

Concerns about the Taliban advancing on Kabul have also led to large crowds in front of banks.

Simultaneously with the fall of major cities, citizens in Kabul rushed to the banks to withdraw their money. In parts of Kabul, it has been reported that banks have been closed to customers due to a lack of money.

Earlier, Taliban spokesperson Zabihullah Mujahid claimed that Maidan Shahr, the capital of Maidan Wardak province, was under the control of the group.

According to him, some government centers, the central prison and all the facilities in Maidan Shahr have been completely taken over by the Taliban.

Mujahid also said that government forces had fled to Kabul and that a large number of weapons and equipment had been seized by the Taliban.

The Taliban has made significant advances in recent days, including capturing Herat and Kandahar, the country’s second-and third-largest cities.

Meanwhile, the Taliban has captured Mazar-i-Sharif, a large, heavily defended city in northern Afghanistan on Saturday.

The fall on Saturday of Mazar-i-Sharif, the country’s fourth-largest city, which Afghan forces and two powerful former strongmen had pledged to defend, hands the Taliban control over all of northern Afghanistan, confining the Western-backed government to the centre and east, Al-Jazeera reported.

The Taliban also captured Jalalabad, the capital of Nangarhar Province in Afghanistan early on Sunday.

Associated Press reported citing locals and the militants themselves that the Taliban captured Jalalabad, the capital of Nangarhar Province in Afghanistan early on Sunday.

An Afghan lawmaker told the AP that the Taliban had seized the city after elders negotiated the fall of its government.

"We woke up this morning to the Taliban white flags all over the city. They entered without fighting", said resident Ahmad Wali, as cited by AFP.