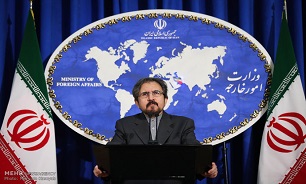 In a message on Saturday, Ghasemi strongly condemned the foiled terrorist attack on Grand Mosque in Mecca and said, "the imminent attack once again demonstrated that terrorism has been steadily rising and expanding, targeting the entire world, the region, and especially Muslims and Islamic countries; terrorism is not associated with any religion, ethnic group or sect and to achieve their sinister goals, terrorists even target the most sacred places of Muslims in the world."

"Islamic Republic of Iran, once again, while warning all governments and in particular the countries of the region on this hideous and disgusting phenomenon, calls on all nations of the region to vigorously pursue and combat the symbol of enmity, hatred, violence and crime," he noted.

Ghasemi underlined that Iran condemns terrorism in any form, anywhere and with any motives and is ready to help countries in countering criminals and death traders.

Saudi Security forces foiled an imminent terrorist act on Friday targeting the security of the Grand Mosque and worshippers by a group stationed in three locations. One of the sites was in the province of Jeddah, and the two others were in Mecca. One site contained the suicide bomber who blew himself up and injured 11 people.