General Bagheri:
Enemy aware that attacking Iran ends in ignominious defeat
TEHRAN (defapress) – Chief of staff of Iranian armed forces Maj. Gen. Bagheri said the enemies have reached the firm conclusion that any assault on Iran would lead to a devastating and humiliating defeat for them.
News ID: 65729 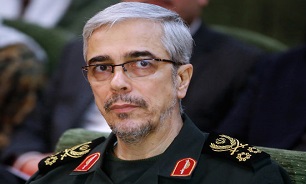 Bagheri said the region was going through a critical period adding "the army plays a deterrent role against threats of enemies and global arrogance as well as that the Leader has always called for promotion of the country’s martial power and preparedness.”

The enemy must arrive at a definitive conclusion that costs of attacking Iran will be by far larger than its benefits, he added.

"Knowing that any attempt to invade Iran will result in an embarrassing defeat for them, enemies have been leading proxy wars,” highlighted the official stressing that Iran’s armed forces hold a bright future.

He went on to emphasized the significance of spirituality and morale along with weapons in the battlefield adding "prudence can also help the nation in the face of internal issues.”

The commander urged to army to rely on its great potential to alleviate life difficulties faced by the nation. "the Army, IRGC as well as Law Enforcement Force are all the same entity when it comes to defending the Islamic Revolution.”

Later into his remarks, Army Chief Maj. Gen. Bagheri touched upon the need to continuously upgrade training courses in response to modern threats. The Army and the Islamic Revolutionary Guard Corps (IRGC) can act as better complements for each other by taking more advantages of their respective capacities.

He also recalled the profound and rich military background of Maj. Gen. Mousavi underlining that the Army will undoubtedly move towards more important goals and take more significant leaps forward under his leadership.