Major General Bagheri and General Khalusi Aqar emphasized;
Expansion of military cooperation between Iran and Turkey /A referendum in northern Iraq is not acceptable
Our armed forces Chief of staff and Chief of staff of the Turkish army, while the emphasis on expanding military cooperation in the two countries, Iraq's referendum about acceptance they not see Iran and Turkey.
News ID: 66109 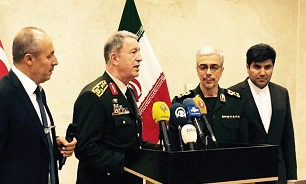 According to the defa press reporter,Guards major general Sardar Mohammad Bagheri «» our armed forces Chief after meeting Gen. «kholoosi Akar» the Turkish Army Chief of staff he news conference along with General kholoosi Akar by expressing the fact of traveling Chief of staff of the Turkish army to Persia, stated: we hope this trip causes near the two countries and the Pacific Iran-Turkey security to Witt.

He was particularly common threats and issues surrounding the two countries in the region there, said: the issues are Iraqi Kurdistan referendum that the two countries shared the same positions and with an emphasis on the integrity and territorial integrity of Iraq. And both lack of acceptance of the joint opinion of the referendum.

Our armed forces Chief reiterated: also in conjunction with militaries of Iraq and Syria that deal with liberation daesh and in relation to lands occupied, we negotiate; shaallh can we help to both security and tranquility to the country.

Major General Bagheri stated: about counterterrorism in the region and the security of the borders of the two countries also had the right to adopt decisions and negotiations.

He added: regarding the cooperation of the two countries armed forces and other armed forces of Muslim countries to help the people of Myanmar's oppressed and trying to make such events do not repeat in the Islamic lands, we also negotiate together.

Our armed forces Chief continued, the armed forces of the two countries expanded cooperation in the field of educational issues, the presence of each other and exchange experiences on the exercise and the security of the borders. Shaallh with the upcoming trip of Mr. Erdogan, the President of Turkey to Iran, and this cooperation will be expanded in all dimensions.

General «kholoosi Akar » the Turkish Army Chief of staff reporters also stated: according to invitation to Tehran last night, major general Bagheri. Hosting and warm hospitality of Iranians who so far has continued last night, thanks.

He said as Turkey and Iran have a history of friendship and brotherhood and also has a history of long-standing historical value. Due to the sensitivity of the area within the framework of cooperation and coordination, the subscribers tried in this respect.

Gen kholoosi akar said: in addition to the political and economic cooperation between Iran and Turkey, are trying to expand military ties and cooperation, particularly in combating terrorism and securing the borders of the two countries agreed to mutual basis.

The Turkish Army Chief of staff noted: to expand military cooperation, our efforts will continue.