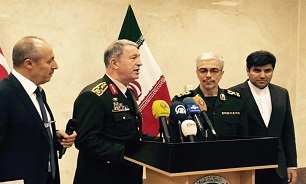 Speaking at a joint press conference with his Turkish counterpart General Hulusi Akar in Tehran on Monday, Major General Baqeri said they discussed a range of issues in their meeting earlier in the day.

The Iranian and Turkish armed forces will broaden cooperation in training, holding war games, and the exchange of experiences, the top Iranian commander said.

He added that the two sides also explored avenues for military cooperation to assist the Muslim people in Myanmar and in Islamic countries.

"We held talks on the common threats to the two countries (Iran and Turkey), and also on the (independence) referendum in the Iraqi Kurdistan Region with an emphasis on the maintenance of Iraq’s integrity and rejection of the referendum,” Baqeri said.

The senior Iranian general then pointed to the fight against terrorism as another topic discussed in the meeting, saying the two sides have "made the necessary decisions.”

For his part, the visiting Turkish general hailed the age-old "friendship and fraternity” between Turkey and Iran, saying the two countries work in cooperation given the delicate regional conditions.

According to General Akar, Iran and Turkey have reached agreements on the battle against terrorism and on measures to ensure border security.

According to Turkish Prime Minister Binali Yildirim, Erdogan will discuss with Tehran their response to the Iraqi Kurdish independence referendum in the upcoming visit.

While Iraq’s Kurds held a vote for independence on September 25, neighbors and countries in the Middle East, including Iran and Turkey, have voiced opposition to the vote.