Generals Discuss Iran-Turkey Cooperation against Secession Bids
TEHRAN (defapress) – Top generals from Iran and Turkey in a meeting in Tehran explored avenues for military cooperation in the war against terrorism and for thwarting the plots seeking disintegration of the regional countries, such as the Iraqi Kurdistan Region’s secession bid.
News ID: 66131 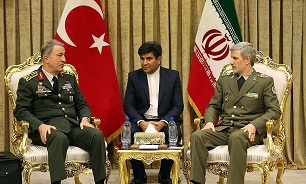 In a Tuesday meeting in Tehran, Iran's Defense Minister Brigadier General Amir Hatami and the General Staff of Turkey Hulusi Akar discussed a range of issues, with the focus on protection of the territorial integrity of the countries in the region.

Highlighting Iran’s support for the sovereignty and territorial integrity of all regional nations, General Hatami said mutual cooperation among Tehran, Ankara and Baghdad would contribute to regional stability and security and counter the separatist moves.

Following the defeat of Daesh (ISIL) terrorist group, the US and Israel have come up with a new plot against the region, the Iranian minister warned, saying they are seeking the partition of the regional countries.

Iran and Turkey, two major and influential countries in the region, will not allow the US and Israel to follow that scenario, he added.

For his part, the visiting Turkish general said Iran, Turkey and Iraq share views on the Kurdistan Regional Government’s plan to secede from Iraq, stressing that Ankara supports the territorial integrity of Iraq and would not recognize any change in the Arab country’s borders.

The Iraqi Kurdistan Region would have to face strict economic, political and military sanctions if it presses ahead with its secession plans, Akar added.

While Iraq’s Kurds held a vote for independence on September 25, neighbors and countries in the Middle East, including Iran and Turkey, have voiced opposition to the referendum.