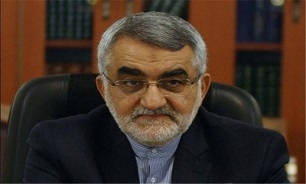 The referendum was held despite disagreements among well-known officials in the Iraqi Kurdistan Region, Chairman of Iran's Majlis (Parliament) National Security and Foreign Policy Commission Alaeddin Boroujerdi said in the Syrian capital on Tuesday evening.

Speaking to the Islamic Republic News Agency (IRNA), Boroujerdi said that despite all the warnings from regional countries, including Iran, the referendum was held in the Iraqi Kurdistan Region and today we are witnessing the negative outcomes it has produced.

The Iranian senior parliamentarian further urged the officials of the Iraqi Kurdistan to annul referendum result as soon as possible and prepare the ground for the return of security and stability to the region.

An independence referendum was approved by Iraqi Kurdistan parliament despite harsh oppositions from the federal government in Baghdad, and warnings from neighboring countries on the repercussions.

'If the Iraqi Kurdistan officials insist continuing on this path, they will face an array of political, economic and military problems,' Boroujerdi stressed.

The Iranian lawmaker, elaborating on his trip to Damascus, said that with regard to the Syrian role as a member of the resistance axis, Iran has on its agenda, closely examining developments in Syria and maintaining regular contacts with the officials in the country.

Since freedom of Syrian city of Aleppo in Dec 2016, the terrorist groups in the war-torn country, including Daesh (ISIS), have been on the threshold of total collapse despite direct and indirect supports from the US, the Member of Parliament said.

'Defeat of terrorists is the defeat of the US and its regional allies,' Boroujerdi said, expressing hope that Syria to move toward 'sustainable security and reconstruction.'

Boroujerdi leading a parliamentary delegation arrived in the Syrian capital on Tuesday evening.

The Iranian official is also expected to meet the newly-elected Speaker of the Syrian People's Assembly Hammoudeh al-Sabbagh, to convey to him the message of his Iranian counterpart Ali Larijani.