The day that fell on the blood flow of the mosque/the story of the martyrdom of the two teenage girls at the base of the Basij
The city day is 14 October by Iraqi planes were bombing and rocket impacting alhamieh mosque. Children aged between 9 and 14-year-old girl, they can be seen among the martyrs.
News ID: 66150 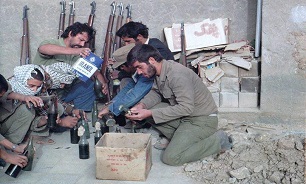 After the noon prayers, a dining table with taste and played a lot of enthusiast and our table just like any other day with hot tea Ahwazi decorate.

Of course, the pleasure of eating on my father's House and yard with my mother, of course, was a couple of months when I was 18 years old, much of the head table 54-year-old mother and I felt I was.

Suddenly, the sound of a shocking explosion exploded, I and my mother was amazed and terrified. The voices were so close that we are most concerned about. This was true of 31 September 1359, we didn't know what happened to us!

I said that Iraqi aircraft at the airport in Iran with many of their fighters, bombers have targeted. Only one air raid. In those days there was no ground attack.

I call with Hussein, Iraqi army Mohammadian country attack. Saeed Ahwaz, the Basij called for the creation of the base has been to organize resistance to the urban defense.

Until that time, we did not resist the Basij base in the city, only my mother left and I went to Ahvaz in the garden pond set and then went to the bazaze to the base of the Basij resistance in the mosque's make up the population.

The command was given to Hussein base Mohammadian. A huge crowd of people came to the mosque for the defense of the municipality. I was responsible for the registration of young people who had come to the mosque of almomen. The days of the passion, and the unexplainable mosques in the city.

We didn't have guns, was going to war with Iraq, with the tank is shown. A massive glass of Cola and a 4-liter gasoline to make coconut Molotov at the corners of mosques and the newly established sites.

We have to reach some of the old weapon (M1) had a problem. One, it was all wood that we had to look at every shot on every shot. The guys told me that they ate the wood.

Ismail farjuyani, an officer in military training, is a member of this site. Although his family in Ahvaz in the first days and weeks of war life, one of his legs was the Quran, on the side of the people and the people that were there in the street, help her feet; also in Ahvaz and Masjed Jame الأئمه was ready to take in the scene, basic combat training Individual guns, fire and urban defense.

Seven days after the outbreak of the war, the city gave warning to the scary voice the day the bombs and bullets and ammunition at 10 to 12 hours and Ahwaz is a town of full-scale war. At the same time as a POW, the smell of gunpowder and sulfur straight across town was fired. The shadow of fear and panic in the entire city and people ignorant of the source of the explosions, the wilderness, was heavy. Everyone from each side fled, where? They did not know.

The fifth column enemy by market rumors were hot. They said that the enemy has been compiled to Ahvaz, a city near the Iraqi gate and it rains. Conflict with Iraqis in three ways in Khorramshahr, etc.

Near the morning once was that it turned out all of these rumors were incorrect. It turned out yesterday, Iraqi aircraft, the Group murdered ammo 92. The next day, according to the military's decision, section 92 was the destruction of the ammunition depot, and all of it among the mosques, two units of ammunition box filled with trailer, parked near the mosque, the mosque courtyard in the middle of the far south, j., in fact, the box containing the ball with their mortars, mines, explosives and so filled with Had been.

We understand the risk these days, and we predicted that this time Ahvaz enemy artillery target mosque.

I was at the mosque nearly every night in the weeks and months of war asslep. In the following days, after the morning prayer, the Qur'anic meeting for members in this site on that day, the 14th day of October, in the Qur'anic meeting on Monday. I went to my mother's House and early morning breakfast with her that I just had breakfast.

The mother, in the House, a few moments later, when I saw that he's back home, he saw, I was relaxed, said the complex was news everywhere that Iraqis with signs kissing j. mosque.

Our forecast was right, Ba ' atheists on mosques in the uterus. I'm on a bike myself, I didn't know that's how I came up to the mosque.

I went, my God, what do I see? Why kids these days go? The upper wall of the north side of the roof of the mosque on the main place of the rocket and the rocket khamse khamseh all its cracks and brick and iron ore, was the body of our youth who were sitting in the courtyard of the mosque, were ready for training The floor of the courtyard of the mosque was a blood bath. I did not stop young Ebrahimi, Kassem, m. mahboubi 9-year son we found out that I was in the midst of martyrs. M. PLATO was our third victim also Yang, which in those days was granted to the revolution.

Here, I am to all those who read the thinking and intellectual, while foreign enemies and the leaders of the dictatorship's voice again for sedition in all its grandeur with all holy books, and think that the reality of war we are still confidential. I recommend that the search for the truth of the sacred defense and questionable answers to all these questions, in the courtyard of the mosque in Ahwaz and alomeireh j. story October 17.

9, 14 and 15-year-old children, we do not send no one to the mosque, some of them clean alligator for them. The children of the town to defend their faith and Iran remain.

9-year-old Sandy Mahboobeh of Muslim persecution of the Islamic Republic of Iran to defend their territorial integrity. Akram, 14 years old, only two weeks after the start of the war to his mother and confessed before giving testimony for the glory of Islam for herself and her family. 15-year-old Farida we are proud that the aleyave mosque.

It's all the truth is our sacred defense of our boys and girls, young and young children, we came to the scene, and remains on the battlefield. With the exception of the five martyrs, the result is a veteran of dozens of artillery attack by the enemy, and if the site is only 10 meters on the other hand, the more painful will be the catastrophic disaster and hit the martyrs and wounded will be much higher than this