Iran’s Zarif Attends Parliament to Brief MPs on JCPOA
TEHRAN (defapress) – Iranian Foreign Minister Mohammad Javad Zarif attended a closed session of parliament on Wednesday to brief the lawmakers about a range of issues, including the latest developments in the Middle East region and the world.
News ID: 66292 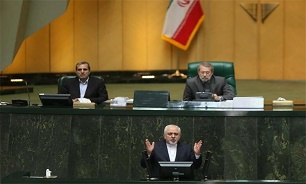 During the parliamentary session, which is underway in Tehran, the Iranian foreign minister also plans to explain about the implementation process of the 2015 nuclear deal between Tehran and six world powers, also known as the Joint Comprehensive Plan of Action (JCPOA).

The independence referendum held in Iraqi Kurdistan Region is another topic being discussed in the meeting between Zarif and the MPs.

Thousands of Kurdish people in favor of KRG’s secession from Iraq took to the streets in Erbil that night, with some waving Israeli flags to celebrate.

Israel’s Prime Minister Benjamin Netanyahu was the only leader in the region to endorse the referendum, while all neighbors have warned that the secession plan would bring instability to the region and disintegrate Iraq.