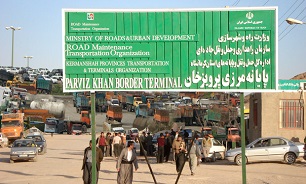 Faramarz Akbari stated that "as of Sunday, Parviz Khan border terminal has been shut and no trade exchange, export, import of travelling of passengers are being carried out.”

He said the reason for shutting down the border terminal pertained to ongoing disputes between the Iraqi government and the northern Iraq’s Kurdish Regional Government (KRG).

"Parviz Khan center is an official border venue between Iran and Iraq and is likely to remain temporarily closed as long as the central government forces replace the Kurdish regional forces and settle at the border,” he continued.

Governor of Ghasreshirin, while noting that the time for reopening the terminal was unspecified, expressed hope that Parviz Khan will become active again once internal issues between Iraqi government and KRG are resolved and disputes are settled.

He underscored that the border terminal had been shut at the request of Iraq’s central government.

"As long as Parviz Khan terminal is closed, Khosravi border remains an alternative for trade transactions and commuting of passengers,” Akbari concluded.