At the head of a high-ranking military;
Major General Bagheri Syria travel
Chief of staff of the armed forces of our country to the President of the Board of high-ranking Syrian military will soon travel.
News ID: 66503 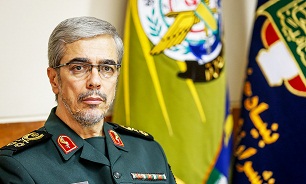 According to Defapress reporter , Iran's armed forces Joint Chief of staff, to the President of the Board of high-ranking military, will travel to Syria soon.

Chairman of the Joint Chiefs of staff of the armed forces in addition to the military authorities, as well as Syrian President Bashar Al-Assad.

The promotion of military cooperation between Iran and Syria, and to consult, collaborate and continue cooperation in the fight against terrorism, as well as reviews of solutions for stability and security in the region, in order to meet the Bagheri in Syria.

This tour, unlike the false ad advertising, signs of determination and will of the Islamic Republic of Iran on the battlefield is terrorism.