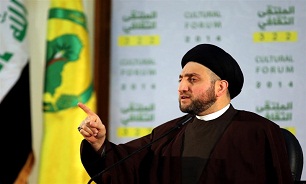 According to the internationalDefapress reporter, head of the Iraqi national coalition, Amar Hakim, also in a statement, the Government of this country to know the legal actions of Kurdistan in Kirkuk, to the Constitution Act and dialogue is the best way to solve problems.

He added: while we are in the final days of the battle with the terrorists we're embossed, daesh forces as part of the main body of the Iraqi armed forces in the liberation of the most important areas of the Loth daesh to learn.

The head of the Iraqi national wisdom flow in another part of this interview stated: the broad support of the people and Government of Iraq in parliamentary democracy, a message of friendship and peace to our beloved countrymen in Kurdistan and we believe that one of the Government's actions, the economic needs of citizens of Kurdistan being fulfilled allahyari Seth.

Wise said: we are calling for action to the law and the Constitution and dialogue is the best way to solve problems and disputes.

The head of the Iraqi national coalition, with an emphasis on the necessity of avoiding unilateral actions, calls for giving the supreme interests of the preference based on personal interests.

In the wake of the lack of interaction with the Kurdistan President Masoud Barzani, the Central Government of Iraq, the country's Government after the set deadline of your country towards the legal right to apply the rule of action and Iraqi forces yesterday too fast and without widespread conflict, the city of Kirkuk to their control.