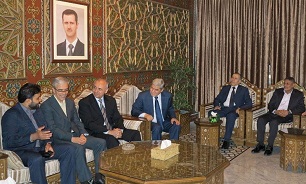 He is supposed to be on this journey with the Syrian Army Chief of staff and Defense Minister meet.

In addition to the military, major general meeting Bagheri as planned with Syrian President Bashar Al-Assad will also meet.

The promotion of Defense and military cooperation with Iran and Syria, consult, disagree over severity and continuity of cooperation to fight terrorism as well as security and stability in the region, strategies, review of the goals of the trip to the General Baqeri Syria.