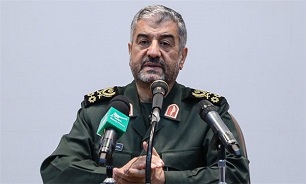 "Having 40 years of the experience of resistance against enemies' threats, the Islamic Republic of Iran is ready to transfer its defense and popular resistance experiences to Pakistan," General Jafari said.

Warning that the regional nations and states are facing the US and the Zionist regime's enmity, he said that certain attempts have also been made to foment insecurity in Pakistan which should be confronted by reliance on popular forces along with Armed and security forces.

Bajwa, for his part, warned that enemies are attempting to sow discord between Iran and Pakistan, and said, "Despite all plots and divisive measures of enemies, we seek to develop ties and cooperation (with Tehran)."

General Baqeri and General Bajwa in a meeting in Tehran on Monday underlined the need to expand defense and military cooperation between the two countries.

During the meeting in the Iranian capital today, the top Iranian and Pakistani generals underlined the need for enhanced security and defense cooperation between Tehran and Islamabad.