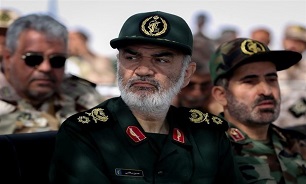 "Between 2013 and 2014, American planes flew hundreds of missions to deliver arms and weapons to Takfirist terrorists,” said Brigadier General Hossein Salami, the Deputy Commander in Chief of Iran's Islamic Revolution Guards Corps (IRGC), on Saturday, recounting the scope of US support for terrorists in Syria.

The Iranian commander made the remarks during an interview with Iranian State-run TV, IRIB, on the occasion of the downfall of ISIL in Iraq and Syria.

"The destruction of ISIL terrorist group was a glorious victory for the Islamic history as they were delivering heavy blows to the body of the Islamic nation to relay a blackened face of Islam to the world,” he underlined.

"The Leader of the Islamic Revolution was the main pillar of these victories,” stressed the commander, describing the ISIL downfall as a humiliating defeat for the supporters of the terrorist group.

"While two governments in the neighboring countries of Iraq and Syria were on the verge of collapse the course of event changed to stability and reassuring balance after an operation,” Mr. Salami said when asked why the liberation of Abu Kamal was marked as the defeat of the ISIL.

"The tail opened when the Americans figured out that they cannot politically tap their military victories in Iraq,” he recounted the roots of crisis in the region.

"They got marginalized in Iraqi developments not managing to manipulate the drafting and rectifying of Iraqi Constitution and harness their desired security contracts in Iraq,” recounted the Iranian figure the motives behind US support of ISIL.

"They did not succeed to enthrone their favored kind of establishment in Iraq and felt that all their military costs paid in Iraq were tapped by the Islamic Revolution,” said Brigadier General Salami.

"They got the feeling that the countries of Iran, Iraq, and Syria were joining each other in a new geopolitical formation in favor of the identity of the Islamic Revolution, naturally promising the nightmare of insecurity, death, and destruction of the Zionist regime,” maintained the Iranian general.

"Henceforth, the Americans decided to reverse the course of Islamic Awakening, in formation at that time, to destroy the spinal cord of Islamic Resistance Front on one hand, and remove, or prevent the expansion of, the influence of the Islamic Republic of Iran in the region with affecting the security arena of Syria,” he continued.

He then recounted that the experience garnered during the course of creating al-Qaeda was converged with the idea of Takfirism and super-powers’ regional strategies to form ISIL in Syria.

They tapped the sentiments and feeling emerged from the Islamic awakening to unify their policies and strategies in Syria.

"A strong and serious coalition was formed and they held that they would be able to topple the Syrian political establishment in a year to derail the Arab country from the Resistance Axis,” added Mr. Salami, after touching upon the deluge of funds and financial supports as well as arms and weapons poured in the joint project by some regional countries.

"But the vigilance exercised by Iranian Leader and the immediate reaction of Quds force commanders gave the Syrians a spiritual support to restore their self-confidence which started the trend of stabilizing the political establishment in Syria,” reiterated the Iranian commander.

"The logic of the Islamic Republic of Iran was that any political or state change should be done by people through a democratic process, rejecting creation of civil war and supply of arms and weapons to armed groups for shifting a political establishment in a country,” he referred to the principle policy of the Islamic Republic of Iran in regards with the crisis in Syria.

"They wanted to set Syria as the starting point of the return of US to the developments in the Islamic world, the Middle East, and the Western Asia, and that is the logic why they threatened the Syrian Establishment,” said Brigadier General Salami, "They paved all the ways to destabilize the political establishment in Syria.”

"The Islamic Republic of Iran very early recognized the depth of their dangerous strategy,” he said.

"The spread of conflicts from Syria to Iraq and occupation of vast territories of Syria both were in line with American strategies,” affirmed Mr. Salami. "The Americans immediately issued the permission to spread these groups from Syria to Iraq and with the support of Americans a huge borderless geography of terrorists was formed in Iraq and Syria in a short time,” said the Iranian commander.

"According to our intelligence input, the intelligence services of Saudi Arabia, UAE, the Zionist regime, and US along with some other countries of the region held countless meetings working on the question how to create a movement which would act as their infantry on the field to topple the Syrian Establishment,” he said.

"Analyzing these moves and the tie between the strategies in a country like Iraq which was under security and intelligence dominance of US, we find out that the Takfirist developments were going on under the close watch of the Americans,” highlighted the commander.

"We received reports that American planes delivered arms and weapons to Syria’s neighboring countries where trucks picked them handed to terrorists in 2013-2014,” recounted the deputy chief of the IRGC.