General Baqeri,
The action of America the beginnings of a "big Intifada" is
The Chief of Staff of the Armed Forces saw the beginning of a "Great Intifada" on the actions of the President of the United States regarding Al-Quds Sharif.
News ID: 67409 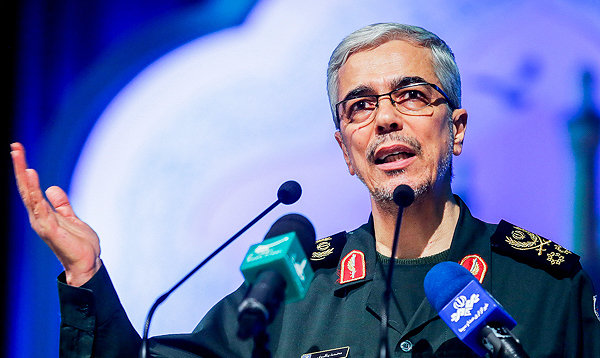 The head of the General staff of the armed forces, noted: Western Asia based on these reasons than other areas of excellence. West Asia is the place of human and divine religions, namely the emergence of the emergence of Judaism, Christianity and Islam. As well as this region has 70% fossil energy reserves in the world and an important junction of the three continents of Europe, Asia and Africa. Someone on this area is a potentially dominating the top global power.

He reiterated: the first world war, greed and expectations in the wake of the global power of the West Asian region took place due to the energy available in this area was that the Western world seek to revitalize the industrial factories wheels.

Major General Bagheri also in another part of his speech with a reference to the U.S. President's recent action "regarding Al-Quds Sharif said: first, the United Kingdom and later usurper Zionist regime in the region of u.s. support, and the last American President to support action IE select the country's first Muslim Qibla of Jerusalem NLP World Zionist usurper regime as the capital which was the beginning of the intifada is considered a great stupidity even by American thinkers, this is also not understood and indeed the events of Mubarak to the resistance front figure.

He continued stating that we were witnessing the direct actions: as the United States in Iraq and Afghanistan fails, as well as the direct actions of the Zionist regime in the region with a heavy defeat against Hezbollah and Palestinian resistance front, and this defeat was against a powerful Government, but also the trunk OBO against guerrilla groups in the region.

Major General Bagheri added: enemies in Western Asia and a mouthful of fat failed and turned into a fiery orb was for them and it is thought to constitute the conspiracy thereupon to pay up and organizing the takfiri, thus the mghasdshan reputation, but within the past 6 years so far in the field of Subversion of the rule were in Bashar Al-Assad failed to bring chaos to the region, it wanted to rule Syria because they support the broad resistance front removed, therefore, began assaults, but the cleansing the land of Syria today is mostly, of course, a small area not capturing sasani daesh and front alnasrh That is also being attacked in a timely manner and will be free.

The head of the General staff of the armed forces said the Americans after the failure of numerous concluded that the duality of the Zionist regime and the Shiite and Sunni Islam to convert to duality and form daesh and thought, can separate the people from the Syrian regime, but today with the survey For Bashar Al-Assad's popularity among the people taken to size up the results of the election.

He added: "If the elections are to be held in Syria today, even the Sunnis are also due to the support of the Government of Bashar Al-Assad he Alavi votes.

The head of the General staff of the armed forces, said: the people in Yemen, his affairs were taken that were attacked by Saudi Arabia but reform with increased its missile range, target the enemy in Lebanon as well as the actions and Pakistan with the conspiracy failed and Hezbollah in Lebanon today More powerful than ever. In the United States and Israel as well as Palestine, the conspiracy failed and today Turkey and Pakistan have reached to the conclusion that the friendship with the United States whoever finally fails.

Major General Bagheri said: thanks to the divine plan is completely defeated enemies and do not have any plans to offer today and all it measures is passive. Today, the horizon is bright and promising regional developments, but should notice that the enemy is not closed and there is not a conspiracy of abandon.

He continued, this area does not need the presence of the arrogance and the countries in the region can get their issues resolved. The reason for the Zionist regime, and the root of sedition and unrest in the region and with its power deal with Iran. We believe that the fate of the area should figure at the foot of the ballot box. Respect for the boundaries of the very basic principles is to change it, the whole area to fire.

The head of the General staff of the armed forces at the end of the expression: today the terms of the judgment to be the defense of the country. The Iranian nation has no eyes, but were you to other countries for self-defense should be powerful and the most important factor of power, trust in God and conceal of the velayat-e Faqih and was popular, because our folks being the agent for the survival of the revolution; therefore, it should not be of the people.