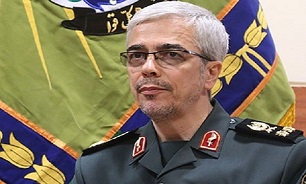 Major General Mohammad Hossein Bagheri, the Chief of Staff of Iranian Armed Forces, Iranian Army, and the Islamic Revolutionary Guard Corps (IRGC) issued separate statements marking the advent of the anniversary of December 30, known as the 9-Dey Epic, as a day which restored tranquility to the nation after months of foreign-bound unrest.

“The intrigue of 2009, which was, in fact, a full-fledged invasion against the entire Establishment of the Islamic Revolution and the Islamic Republic, led by the support of the imperialism, Zionism, and the betrayal and folly of intrigue plotters, put forward its lessons for the big nation of Iran, especially conscious and gallant youth to be ready for the dangerous turns of the future to ruin the hopes of the enemies of the Islamic Republic of Iran in achieving their evil intentions,” reads the statement released by the Iranian Major General Bagheri.

The top commander vows, in the message, that the Iranian nation and armed forces will not allow the “satanic and evil dreams of undermining or toppling the Islamic Establishment and Revolution come true”.

In the statement released by the Islamic Revolutionary Guard Corps (IRGC), the organization calls for reviewing of the events of 2009 and learn the lessons of history to be ready for more complex conspiracies and plots.

The statement issued by the Iranian Army highlights the bold presence of the nation on December 30, 2009, as a sign of loyalty to the Revolution which foiled all the plots of the internal and foreign origin.