The stars of Christ in the holy defense galaxy
From the soils of “Hajj Imran” to the farewell to the Church of “Tarhmanshats”
The martyr “Yurik Sardarin Seth”, the 6th of September, went to the forefront of the “Hajomran” area for the last time, and three days later, while guarding the area, he was martyred by the death of his quiver mortar and returned to the Church of Targemachates to eternal paradise.
News ID: 67916 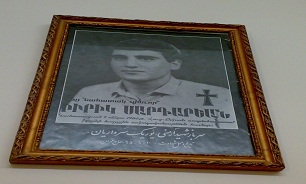 According to a Defapress reporter from Arak: with enemy attackers buried all the strata of the aggressor country, ranging from the man and woman, young and old, they saw their mission as the dam rests on the stand against the enemy.

Spunky women, husbands, fathers and brothers have their way, front, and also firmly assigned with faith needs determination to their enemies.

Song Jun and quiver and mortars was heard in different cities, the other does not matter what religion follower that the existence and of the heavenly book where you follow.

The war that began across the country of resistance songs a voice shouted together and the children of their Muslim brothers, like the Virgin Mary as well as her boots straps tight * to prove that he may seize the enemy even one of their soil and water ojab sleepless bows and an interpretation.

It's also thrown their Kalashnikov strain on the shoulders of their front line and alone and efforts such as the "conductor" and "s in the sky, eternity for your figure.

Today, more than 30 years since that day passes and the other sons of the Virgin Mary as the holy martyrs in defense Galaxy burn away.

MartyrYoric sardariyan set 11-player "eighth son of rural families" and Alecsahnder who was the 16th October 1343 in the village kalaveh has seen.

Four years of elementary in his place of birth was that the city of Arak and subsequently passed to his brother and six dokhahr moved to Tehran.

The lessons of the elementary school fifth grade school in South Tehran’s finished and after a period of study leave tips and screw in the alternator workshop in the street of SADI to learn the profession.

This martyr visited nearly 20 months of military service in 22 months, was present and in front is the sixth addition to the front lines for the last time in the region, "Haj Omran» return and three days later guarded the area while doing hit with mortar shrapnel shell was martyred.

Clean configuration and Professor yorik after doing a special religious ceremony of the Church "Holy" with the presence of a large crowd targmanchats of Armenians in Tehran, representatives of Parliament, the public and the institutions of the country in the Armenian cemetery to be buried.