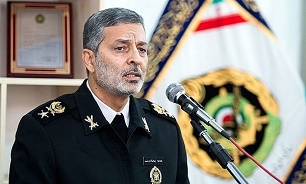 "The Americans' serious and deep hostility towards the Iranian nation has been evident since the first day of the (Islamic) Revolution and before it and it doesn’t need any special analysis," General Moussavi told reporters in Tehran on Monday.

General Moussavi underlined that the Iranian people and government have proved in the past 40 years that they thwart any plots hatched by the enemies against them.

His remarks came after the Iranian government and people harshly condemned President Donald Trump for sending out tweets in support of the recent unrests in Iran.

People took to the streets in four other major cities across the country on the fifth consecutive day of nationwide rallies to reiterate support for the Islamic establishment following scattered riots in some parts of the country.

The Iranian people held rallies in Rasht, Yazd, Shahr-e Kord and Qazvin on Sunday as a bunch of other Iranian cities and towns were the scene of massive rallies in the past few days.

They shouted slogans and carried placards, condemning violence and sedition.

They also carried images of Supreme Leader of the Islamic Revolution Ayatollah Seyed Ali Khamenei and Iran's flag to show allegiance to them.

Last week, a number of peaceful protests began in several areas across the country, with the participants calling on authorities to address their economic issues.

However, the economic protests in a number of Iranian towns in the past few days turned into riots each comprised of a few hundred protesters after the peaceful gatherings were overshadowed when armed elements and vandals showed up among ordinary protesters and began to launch attacks on public property, police stations and religious sites.

The original protesters soon left the streets upon calls by the authorities so security forces could deal with the rioters and sporadic violence, which continued in some towns and cities for several days.

Then on Wednesday, hundreds of thousands of Iranian people in different cities and towns poured to the streets to condemn the recent riots and chaos in the country and show support for the Islamic Revolution.

People across the country, including Khuzestan, Qom, Kermanshah, Ilam, Gilan, Alborz, Lorestan, North Khorassan, Golestan and Hamedan provinces, gathered in important squares and streets of their cities and towns to show unity and deplore hijack of the recent economic protests in Iran by rioters in the country.

They chanted "Death to the US", "Death to Israel" and "Death to the Seditionist" slogans to condemn US President Donald Trump and Israeli Prime Minister Benjamin Netanyahu's support for the recent riots in Iran.

They also carried placards which called on the government to pay attention to the legal demands of the people to improve life standards, create more jobs and decrease inflation.

On Thursday, millions of Iranian people across the country held fresh rallies to voice support for the Islamic Republic and denounce violence and riots.

The participants also held the US and the Israeli regime responsible for the recent wave of violence in Iran.

Also, people continued rallies across the country, including the capital Tehran, on Friday to show their solidarity with the Islamic Republic and condemn the recent scattered riots in some areas of the country.

In Tehran, thousands of Tehrani worshippers rallied after Friday prayers and condemned the meddling by the US, Israel and Britain in Iran's internal affairs to incite violence and riots in the country.

Iranians in Tabriz, Sari and Kerman also rallied and shouted slogans against the foreign-backed violence, while holding up placards and national flags.

The Tehrani worshippers and Iranians in other cities chanted slogans such as "Down with the US", "Down with Israel" and "Down with Trump.

Ayatollah Khamenei warned on Tuesday that the enemies have mobilized all their power and tools to hit a blow at Iran, alluding to certain foreign states' role in the recent riots in the country.

"The enemy has always been waiting for an opportunity and a breach to enter and hit a blow to the Iranian nation," Ayatollah Khamenei said, addressing the families of the Iranian martyrs in Tehran.

"During the events in the past few days, the enemies of Iran allied to create problem for the Islamic Republic by different tools in their hands, including money, weapons, policy and security organizations," he added.

Ayatollah Khamenei said that the nation's spirit of bravery, sacrifice and faith blocks the enemy and its hostilities, adding that he will speak with people about the recent protests and unrests in Iran in due time.