Still hope crew members found alive in engine room of burning Iranian tanker
TEHRAN (defapress) – Mohsen Bahrami, a spokesman for National Iranian Tanker Company told AP that rescuers would "likely" find survivors as "the engine room is not directly affected by the fire and is about 14 meters under water."
News ID: 68011 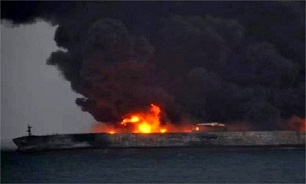 The Iranian oil tanker that has been burning for four days in the East China Sea could continue burning for weeks, and there is still hope that some of its 31 missing crew members may still be found alive, officials say.

Iranian company that owns the Sanchi tanker told AP that survivors could still be found on board the burning ship, which officials have warned is in danger of exploding.

"There is still hope," said Mohsen Bahrami, a spokesman for National Iranian Tanker Company. Rescuers would "likely" find survivors as "the engine room is not directly affected by the fire and is about 14 meters under water," he told AP.

Deputy Managing Director for Maritime Affairs Hadi Haghshenas said "If there is no other explosion in the next few hours, the possibility of controlling or putting out the fire is possible in the coming days."

The body of one of 32 crewmen has been recovered, while the other 31 are missing.

Dozens of rescue boats have battled strong winds, high waves, and poisonous fumes to put out the fire and search for the missing sailors in an area of 3,000 square kilometers.

The tanker collided with a freighter carrying grain from the United States about 300 kilometers off China's coast near Shanghai.

The Sanchi was carrying 136,000 tons of condensate, an ultralight fuel that is highly flammable, to South Korea.

The Chinese government said late on January 9 that it had not found a "large-scale" oil leak, and the condensate was burning off or evaporating so quickly it would leave little residue if it spills into the ocean. That reduces the chances of an environmentally destructive oil slick forming off China's coast.

Still, condensate is highly volatile when exposed to air and water, and concerns were growing the tanker could explode and sink as long as the fire burns uncontained.