Senior Cmdr:
Enemies target youth in cyberspace
TEHRAN (defapress) – The Head of Iranian Army’s Strategic Studies Center Brigadier General Pourdastan said on Friday the enemies of the Islamic establishment are using the cyberspace in line with their plots for the future.
News ID: 68423 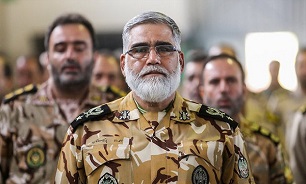 Speaking at a ceremony in commemoration of Holy Shrine Defenders in Qom on Friday evening, Brigadier General Ahmad Reza Pourdastan said “the enemies are developing different plots one after another against the Islamic world,” adding “with the leadership of [Iran’s] Leader as the Commander-in-Chief of the armed forces, the plots are foiled.”

Brigadier General Pourdastan added that the enemy is targeting the youth using cyberspace to reach its goals in the future and make a future for themselves.

Warning the Iranians of the economic war against the country, the head of Iranian Army’s Strategic Studies Center pointed out that another soft power the enemy is using against Iran is economic sanctions.

He noted that the only way to reach welfare and development is through following the Leader’s guidelines.

Regrading the future threats against the country, Brigadier General Pourdastan pointed out “the armed forces monitor the developments in the region and beyond, and in consistent with the enemy’s threats, they bolster their abilities.”

The senior army commander warned that “our armed forces are always ready and they will never be surprised by enemy’s attacks, and if the enemies are thinking of aggression, they will surely regret it.”