Tehran-Tashkent consultations to strengthen peace, stability in region
TEHRAN (defapress) – The president described relations between Iran and Uzbekistan as close in terms of culture and history, adding "Tehran welcomes acceleration of development of comprehensive relations with Tashkent."
News ID: 68605 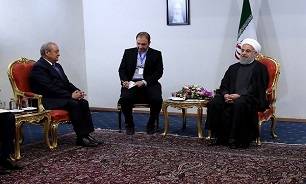 President Hassan Rouhani met with the Foreign Minister of Uzbekistan, Abdulaziz Kamilov, on Saturday and emphasized the urgent need to strengthen inclusive political and economic relations and compensate for the past shortcomings in the development of cooperation between Tehran and Tashkent.

“Activating all capacity and potentials for cooperation between the two countries in various fields, including economy, energy, transit, joint ventures, tourism and the enhancement of the level of banking and monetary exchanges, can be a great step for a leap in the comprehensive development of the relations between Iran and Uzbekistan," he noted.

President also referred to the importance of deepening cultural cooperation between the two countries, saying “in the field of culture and art, Iran and Uzbekistan have a common root, and as two Muslim countries, we can promote peaceful and kind Islam against violence and extremism."

The Foreign Minister of Uzbekistan Abdulaziz Kamilov offered congratulations on the anniversary of the victory of the Islamic Revolution and referred to Iran's effective role in the developments of the region and the world, saying “Uzbekistan is determined to activate all capacities and potentials for cooperation to open a new chapter in relations with the Islamic Republic of Iran."

The Uzbek Foreign Minister described his country's stance towards Islam as completely in accord with the Islamic Republic of Iran and added "we believe that we can prevent the process of extremism through close cooperation in this field."

“In this regard, we are seeking to further strengthen our relations with Tehran” the Minister of Foreign Affairs of Uzbekistan added.

Referring to the unique role of the Islamic Republic of Iran in consolidating regional stability, he also presented a written message from the President of Uzbekistan to President Rouhani.

In this letter, our country has been invited to attend a conference that will be held in the coming months at the level of foreign ministers of 21 countries, as well as representatives of the United Nations and the European Union regarding stability, security and development in Afghanistan, which was welcomed by Rouhani.