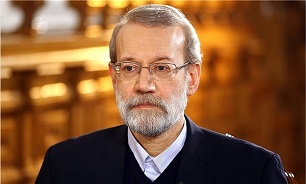 Iran's challenges will be solved through its people's resolution, and Iranians do not need any guardian from outside the country, Larijani told reporters in the Southern city of Shiraz on Sunday on the sidelines of the nationwide rallies to commemorate the anniversary of the victory of the Islamic Revolution in Iran in 1979.

"People, at their own volition, are trying to lead the country toward progress, welfare and security," he said.

"Their presence is a valuable support for the country's move," Larijani said, expressing the hope that all Iranians will be united in the march toward the same goal.

The annual nationwide February 11th rallies marking the 39th anniversary of the victory of the Islamic Revolution were staged in the capital city of Tehran and other cities across the country on Sunday morning.

Millions of Iranians from all walks of life are out in the streets and squares all over the country to express their support for the cause, aspirations and ideals of the Islamic Revolution.

In Tehran, hundreds of thousands converged at Azadi Square, Tehran's main square and the site of major national rallies over the past four decades.

In addition to the annual theme of renewing support for the revolution and Islamic establishment, this year rallies are important after the propaganda launched by the western media against Iran after the recent economic unrests in the country.

Yet, what has made this year's rallies even more important is the call by the high-ranking Iranian officials on people to give a crushing response to the recent threats of US President Donald Trump by staging massive rallies even larger than ever.

The rallies this year are covered by over 6,000 reporters and photojournalists, including hundreds from other countries.

The final collapse of the Shah's regime came on February 10 when the military renounced its loyalty to the Shah and joined the revolutionary forces.