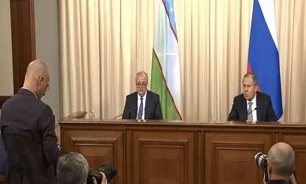 In a press conference with his Uzbek counterpart Abdulaziz Kamilov on Friday, Lavrov said that the terrorists use civilians in Eastern Ghouta as human shields in order to put the blame for any casualties on the Syrian Army and government and present them as parties that violate international humanitarian laws, adding that whoever wants to ensure the human rights of the civilians in Eastern Ghouta should put pressure on the terrorist organizations that exist there.

The Russian minister said that the US-led international coalition doesn’t seem to fight Jabhat al-Nusra terrorist organization in Syria, adding that “al-Nusra is not being targeted. We still have no evidence that the US-led coalition considers the Nusra as a target for its military campaign.”

Lavrov also noted that the so called “White Helmets” have repeatedly been caught falsifying information.

He pointed out that the proposed UN Security Council resolution on Syria’s ceasefire (proposed by Kuwait and Sweden) doesn’t guarantee that the terrorists will lay down their weapons, but at the same time, Moscow is ready to back the proposal.

“In order to make this resolution effective — and we are ready to agree on a document that will do so — we propose a formula that will make the ceasefire real and based on the guarantees of the parties that are currently residing in East Ghouta; the guarantees should be backed by the external powers, including those who have influence over the extremist groups that entrenched themselves in the Damascus suburbs,” the minister said.

Lavrov said that the Astana process remains the only barrier that prevents the United States from dividing Syria, noting that these plans, even though they are denied by the US, are being implemented by them east of the Euphrates.

On the agreement on the de-escalation zones, Lavrov pointed out that the Americans do not want to recognize that Russia has played the key role in reaching it, which raises many questions for Moscow, adding that preparations are being made for the meeting between the foreign ministers of the three guarantor states (Russia, Iran, and Turkey) that will be based on UNSC Resolution 2254, which requires respect for the sovereignty of the Syrian Arab Republic and its territorial inviolability.