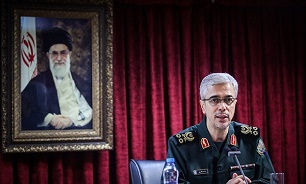 The Chief of General Staff of the Armed Forces of the Islamic Republic of Iran made the remarks in a ceremony in Tehran on Sunday, saying that the big powers have exploited other nations in the world for years and want to impose their culture on others.

Stating that Education Ministry and armed forces have joint work in defining and safeguarding national security, Major General Bagheri warned against foreign plots against the education system in Iran.

He noted that Iranian students must be educated based on an Iranian and Islamic culture.