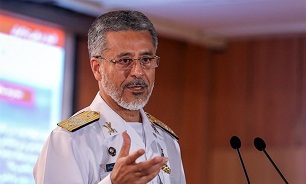 TEHRAN (Defapress) – Speaking to reporters on the sidelines of the IONS 2018 on Monday, Deputy Chief of Iran's Army for Coordination Rear Admiral Habibollah Sayyari said the commanders attending the conference in Tehran will hold a closed-door meeting on Wednesday to decide on a joint naval exercise by the member states.

He explained that the drill will not be launched to exercise combat missions, but to improve coordination in the fight against piracy.

The naval symposium, attended by high-ranking delegations from 35 countries, began on Monday morning with an opening speech by Chief of Staff of the Iranian Armed Forces Major General Mohammad Hossein Baqeri.

Iran officially assumed presidency of the symposium for two years on Monday morning.