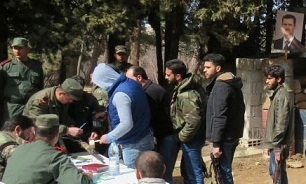 TEHRAN (Defapress)-The Syrian Army and the Russian Reconciliation Center, in a meeting with the militants near Bebeila-Seyedi checkpoint, concluded the preliminary measures to a peace agreement in Yalda, Bebeila and Beit Saham regions in the Southern part of Damascus province.

Based on the agreement, the militants who refuse to join the peace plan will leave the region for other militant-held areas and those who do not intend to leave are allowed to apply for government amnesty.
However, the army operation against the ISIL and Al-Nusra will continue in Southern Damascus.

Earlier reports said that the army distributed thousands of leaflets in militant-held regions in the Southern part of Damascus province, urging the terrorists to lay down arms and surrender to the government forces immediately.

The army men continued to storm ISIL's positions in the Southern part of Damascus province and imposed control over several farms between Hajar al-Aswad and Yalda region up to Matnazah al-Asheq and al-Bawayek regions.

In the meantime, the army's artillery and missile units opened heavy fire at terrorists' movements and positions in al-Tarboush area in Yarmouk camp.

A field source reported that the army's advances have tightened noose on the terrorists in the region.

The source further said that the army has distributed thousands of leaflets to war the terrorists to surrender immediately or wait for the government forces' heavy attacks.