Top Commander: US Plots Fail to Change Iran's Defense Strategy
Chief of Staff of the Iranian Armed Forces Major General Mohammad Baqeri strongly blasted the western countries, specially the US, for hatching plots against Iran, and said Tehran's defensive strategies will not change even an iota.
News ID: 69886 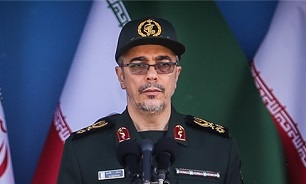 TEHRAN (Defapress)-"Iran's strategy of supporting the oppressed people and those who are seeking independence in the world, and confronting the organized plots of leaders of arrogance will remain unchanged," General Baqeri said.

He underlined that the US and its allies as well as some reactionary countries in the region are speaking of imposing sanction and threats against Iran, but they should be aware that they will not be able to harm Iran.

"The enemies' sanctions against Iran as a country that is bestowed by the divine blessings will not work, and the sinister enemies will be disappointed," the top commander added.

In relevant remarks on Tuesday, Iranian President Hassan Rouhani warned the US officials against discarding the 2015 nuclear deal, stressing that Tehran will firmly stand against all their plots.

"The plots hatched by the US, the Zionists and certain reactionary Arab regimes in the region will not affect our dear Iran's progress. Those who have sit in the White House should know that the government, on behalf of the great Iranian nation, will firmly and powerfully stand against them no matter they remain committed to their undertakings or not," President Rouhani said, addressing the Iranian people in the Northeastern city of Tabriz.

He stressed that Iran remains committed to its undertakings under the deal it has signed, but meantime warned, "But if anyone wants to betray our nation and our agreement, he/she should wait for its dire consequences."

President Rouhani underscored that Iran has planned for different scenarios against any possible enemy move.