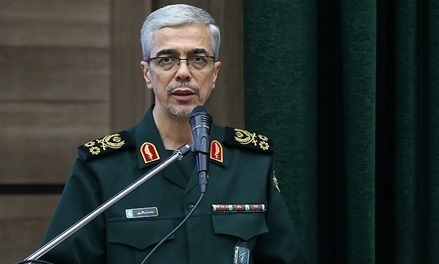 TEHRAN (Defapress)- "The Armed Forces are at the highest level of preparedness and would respond to any threat and aggression by enemies of the Islamic Iran," General Baqeri said on Sunday.

In relevant remarks in April, General Baqeri stressed that the Army and the Islamic Revolution Guards Corps (IRGC) are prepared with their maximum power to defend the country.

Today, the Armed Forces, specially the mighty Army and the hero IRGC, are on the peaks of unity, integrity, coordination and all-out defensive preparedness to establish sustainable security and continued tranquility, General Baqeri said in a message to IRGC Commander Major General Mohammad Ali Jafari on the occasion of the IRGC Day in Iran (April 20).

He added that the Army and the IRGC's might and power has disappointed the enemies of the Iranian nation, specially the US, the Zionist regime and the Saudi regime.

The army and the Islamic Revolution Guards Corps (IRGC) as powerful arms and iron fists of the Islamic Republic have displayed enemies' weakness in assessing their way of response to any possible threat and aggression against the country, General Baqeri said in a statement on the occasion of the Army Day in Iran (April 18).

He added that the Iranian Armed Forces will not allow the enemies, specially the US and its western and Arab allies, to harm the Iranian nation's wise strategy of resistance.