Assassination Operations Intensify in Northwestern Syria, Terrorist Groups Accusing Each Other
A number of terrorists, including a commander, have been killed in assassination operations in Idlib province, field sources reported on Saturday, adding that the militant groups accuse each other of the attacks.
News ID: 70253 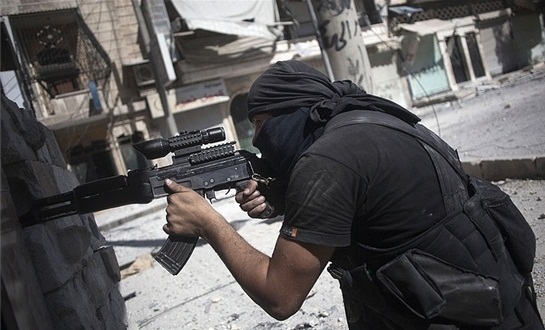 TEHRAN (Defapress)-The sources reported that a roadside bomb blast killed Jund al-Malahem Commander Abu Jasim Kansafra and two of his aides on a road connecting the town of Kafr Nabal and Kansafra settlement in Southern Idlib.

In the meantime, a bomb went off near al-Bahrah square in the town of Khan Sheikhoun in Southern Idlib, killing and wounding a number of terrorists, the sources said.

Also, two Uzbek terrorists were assassinated by unknown assailants near the town of Ma'arat Mesrin in Northern Idlib, they added.

The sources went on to say that the terrorist groups in Idlib province have started accusing each other of orchestrating assassination operations.

After the attack, Tahrir al-Sham Hay'at (the Levant Liberation Board or the al-Nusra front) accused Ahrar al-Sham of collaboration with the assailants to free the ISIL inmates to gather forces for an attack on Tahrir al-Sham position.

The sources said that tensions have heightened among the terrorists in the region, adding that one of the militants' checkpoints in the town of Ariha in Southern Idlib came under attack with gunfire. A number of terrorists were killed in the incident.

Reports also said that Tahrir al-Sham terrorists have detained a number of Faylaq al-Rahman militants who wanted to move from Idlib to Afrin.

Terrorists had earlier agreed to end clashes after bloody battles in Northern Syria.