Syrian Army Reinvigorates Combat Capabilities in Western Aleppo
The Syrian Army has dispatched more troops and equipment to the Northwestern countryside of Aleppo city, preparing for an imminent anti-terrorism operation in the region, field sources reported on Wednesday.
News ID: 70317 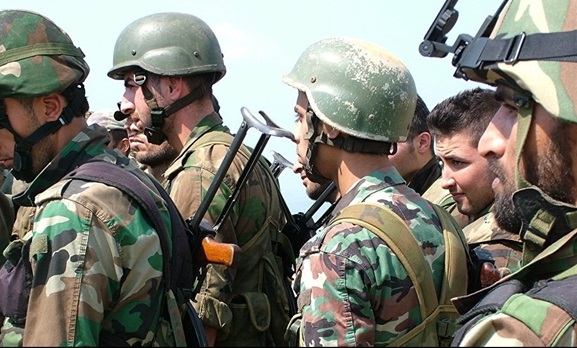 TEHRAN (Defapress)- The sources said that the army has send a large number of soldiers and a large volume of military hardware from Lattakia to Kafr Hamra and al-Lairamoun regions in the Northwestern countryside of Aleppo city to take part in a possible operation against terrorists.

They went on to say that the terrorists of Tahrir al-Sham Hay'at (the Levant Liberation Board or the Al-Nusra Front) have recently increased their attacks on army positions and residential areas in the region.

In a relevant development on Sunday, terrorists, deployed in Northern Aleppo, launched mortar attacks on a local bazaar in al-Nile Streets in the Northwestern countryside of Aleppo city.

In response, the army's artillery and missile units pounded terrorists' strongholds and movements in Kafr Hamra region and its surroundings in the Northern countryside of Aleppo.

Also, local sources reported that fierce clashes are underway between the army men and terrorists in a region near al-Zahra district which had earlier come under attack by the militants' mortar fire.

The sources further said that a large number of terrorists were killed or wounded and their military equipment were destroyed in the attacks.