Iranian DM Warns US against Military Miscalculation
Iran's Defense Minister Brigadier General Amir Hatami warned the US that any military aggression against the country will receive a crushing and painful response by the Iranian Armed Forces, stressing Tehran's determination to further bolster its defense power.
News ID: 70336 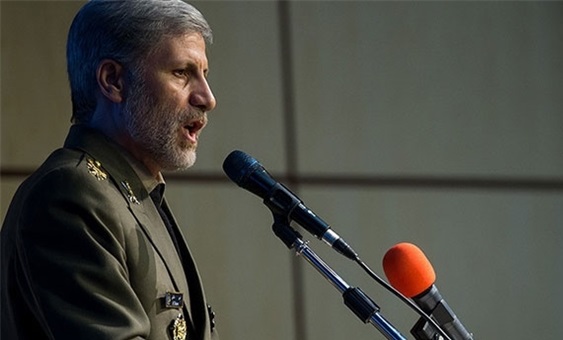 TEHRAN (Defapress)- The US never dares to take any action against Iran as "our missiles will send their warships to the depth of sea in a way that they will never find the corpses of their soldiers", General Hatami said, addressing the defense ministry personnel in Tehran on Wednesday.

Iran's defense power and missiles are deterrent, he said, adding that "our might and defense power will be boosted and bolstered" in all fields proper to their pressures.

Iran will never let any country to interfere in its domestic issues, specially its defense and missile capabilities, General Hatami said.

In relevant remarks on Wednesday, Chief of Staff of the Iranian Armed Forces Major General Mohammad Hossein Baqeri underlined his country's determination to strengthen its defense power despite pressures by the West, specially the US.

"Thanks God, today, our Armed Forces are more than any other time at the peaks of defense power and military and combat preparedness and they don’t wait for permission or smile of any power to develop their defense power," General Baqeri said, addressing an open session of the parliament in Tehran.

He, meantime, warned that the enemies who do not dare to launch a military war against Iran are now attempting to pressure the Iranian nation in economy and through psychological warfare.

General Baqeri underscored that Iran remains committed to its undertakings and respects the international laws and despite its advisory role in certain regional states that has been presented at the demand of their legal governments, it does not intend to launch war against any country.