Commander: Israel Not to Exist in 25 Years
Deputy Commander of Iran's Basij (Volunteer Force) Brigadier General Mohammad Hossein Sepehr underlined that the Zionist regime will not be able to survive in the next 25 years.
News ID: 70509 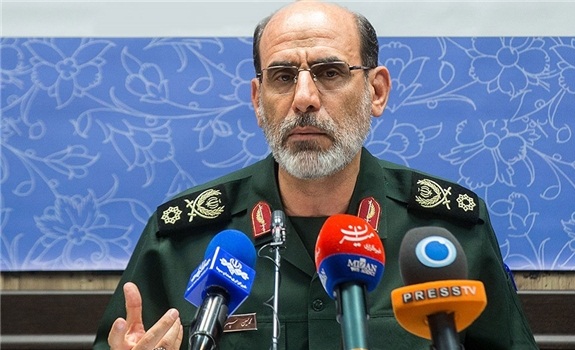 TEHRAN (Defapress)- "Supreme Leader of the Islamic Revolution (Ayatollah Seyed Ali Khamenei) said that the Zionist regime will not exist in the next 25 years and with God's help, we promise to annihilate Israel," General Sepehr said, addressing a meeting in Tehran on Saturday.

He voiced confidence that the Zionists are themselves certain that they are on the path of annihilation.

His remarks alluded to the September 2015 comments by Ayatollah Khamenei who described Israel as a "fake" regime, and said there would not be any Israel in 25 years from now.

He described national might as the only way to end the US plots, and said a strong economy, growing scientific progress and maintaining and reinvigorating the revolutionary spirit and morale of the people, specially the youth, are among ways to boost national might and power.

Ayatollah Khamenei reiterated the need for vigilance against the US plots to influence Iran, and said Tehran had only entered negotiations with Washington just on the nuclear issue "and we will not negotiate with the US in other fields.