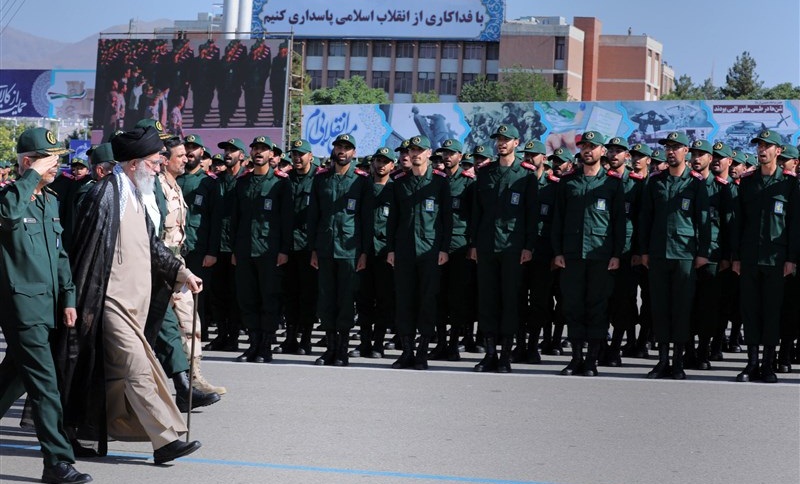 TEHRAN (Defapress) – “The enemy’s plot is creation of rift and division between the (Islamic) Establishment and nation, but such a ploy reveals their stupidity, because they are not aware that the Islamic Republic’s Establishment is nothing different from the Iranian nation, as these two are inseparable,” Ayatollah Khamenei, Commander-in-Chief of the Iranian Armed Forces, said in a graduation ceremony of cadets at Imam Hussein (AS) University in Tehran on Saturday.

Denouncing the current economic pressures on Iran as a hostile plot for making the Iranians discontented, the Leader said, “By God’s grace, we will boost bonds with people day by day, and strengthen the pious, motivated and pragmatic youth with our enemy-shattering unity.”

Ayatollah Khamenei also emphasized that strengthening the elements of national might and fortitude in confrontation with the enemy will thwart the hostile plots.

Iranian military forces and bodies involved in construction have relied on such morale and courage to run the country, Ayatollah Khamenei added, stressing that true power is founded upon independence, freedom and people.

“It is not might when some (countries) pay foreigners to buy arms and stockpile them, while they cannot even use those weapons, or when they (foreign powers), coming from the other side of the world, set up (military) bases in a country and suck the blood of its people in order to protect the power of a (ruling) family,” Ayatollah Khamenei deplored, slamming such dependence as “stupidity and dishonor.”

The Leader then hailed the Islamic Revolution Guards Corps (IRGC) as a component of Iran’s might, calling for the qualitative development of the military force.

Ayatollah Khamenei also rejected the notion that Iran’s power is being exaggerated, adding, “The main proof of the Iranian nation’s might is that one of the world’s most ruthless and brutal powers, namely the US, has spared no effort and wickedness to confront the Iranian nation over the past forty years without being able to do a damn thing, while the Iranian nation has developed instead.”

The other evidence of the Iranian nation’s power, the Leader explained, has been the formation of US-led regional coalitions for countering the Islamic Republic. “If the US had been able to achieve its objectives single-handedly, it would not have needed to form coalitions with the region’s disgraceful and reactionary states.”

Highlighting the Iranian nation’s growing hatred of the US, the Leader lashed out at the idea of surrendering to the enemy, warning, “The cost of surrender is much more than the cost of resistance, while the benefits and achievements of fortitude are hundreds of times greater than the costs of surrender.”

In November 2017, Ayatollah Khamenei slammed US President Donald Trump for calling Iran a “terrorist nation”, saying such a stance indicates Washington’s deep grudge and hostility toward not only the Islamic Establishment, but also the people of Iran.

Ayatollah Khamenei had also called on Iranian authorities not to back down in the face of the United States, saying that the US will not reduce its enmity if Iran backs down further but, in fact, it will become more insolent.