Syrian Army Dispatches More Military Convoys to Idlib Battlefield
TEHRAN (defapress)- The Syrian Army sent more troops and equipment to the Northwestern parts of the country on Sunday to reinvigorate its combat capabilities for an imminent major operation in Idlib province.
News ID: 72437 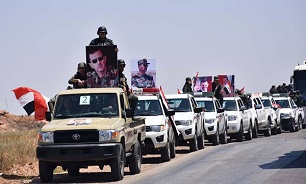 The army forwarded a long convoy of military vehicles and tank-carrying trucks along with a large number of fresh soldiers to Idlib and Northern Hama to end terrorists' presence in Idlib, Aleppo, Lattakia, and Hama provinces.

In the meantime, a field source reported that hundreds of fresh army men have been deployed at contact lines with Tahrir al-Sham Hay'at (the Levant Liberation Board or the Al-Nusra Front) terrorists and militants of the Operation Olive Branch in Afrin in recent days.

The sources further said that the army is planning to kick off a large-scale operation in different flanks to liberate Idlib province.

Meanwhile, the Arabic-language al-Mayadeen TV Network reported that the terrorists that come from China and are known as Uyghur as well as Turkistani and Uzbek militants have transferred their family members to the borders with Turkey in Idlib and Lattakia provinces.

In a relevant development on Saturday, the army forwarded a large number of forces and military hardware, including armored vehicles and heavy weapons, to contact lines with the terrorists in Northern and Northeastern Aleppo in the last few days.

A field source reported, meantime, that over five thousand army men and a huge amount of arms and ammunition have been deployed in a large region from al-Shahba dam to contact lines with terrorist-held Afrin, Um Hawsh, Tal Rifat, Habal, Ein Daqna, Minq and its airport, Deir Jamal, Nubl and al-Zahra and other regions in Northeastern Aleppo.

The source further said that deployment of more army forces and equipment is mainly aimed at countering possible attacks of the terrorists and also preparing for a large-scale cleansing operation to purge the region from the remaining pockets of the terrorists.

The source went on to say that fourteen civilians, including children and women, were killed or wounded in the terrorists' mortar attack on al-Lairamoun region North of Aleppo.