Iran to Give US Slap in Face by Defeating Sanctions: Ayatollah Khamenei
TEHRAN (defapress) – Leader of the Islamic Revolution Ayatollah Seyed Ali Khamenei highlighted reasons behind the US government’s hostilities toward the Iranian nation and said in response, the Islamic Republic will once again give the US “a slap” in the face by defeating its economic sanctions.
News ID: 72859 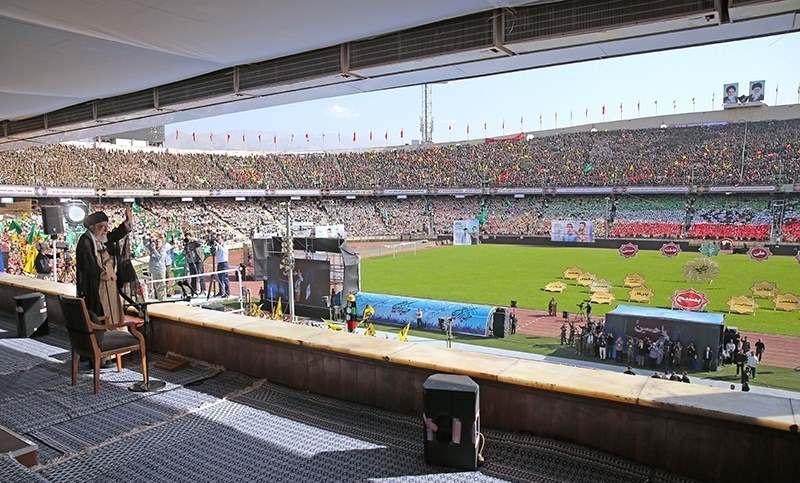 Addressing tens of thousands of Basij (mobilization) volunteer forces at the Azadi Stadium in western Tehran on Thursday, Ayatollah Khamenei pointed to the enemies’ battlefields, saying that Islam is on the top of the list.

The Leader went on to say that the US’s enmity towards the Iranian nation is not merely due to the slogan “Death to America”, adding that the Americans’ hatred is rooted in Iranian nation's movement.

“They are afraid of the Islamic power and the (Islamic) Revolution’s might; therefore, they attempt to undermine and destroy the elements of (Iran’s) power,” Aytollah Khamenei stated.

“With the grace of God, we will defeat the sanctions… and with the failure of the sanctions, the US should be given another slap in the face by the Iranian nation,” the Leader said.

On May 8, the US president pulled his country out of the Joint Comprehensive Plan of Action (JCPOA), the nuclear deal that was achieved in Vienna in 2015 after years of negotiations among Iran and the Group 5+1 (Russia, China, the US, Britain, France and Germany).

US President Donald Trump on August 6 signed an executive order re-imposing many sanctions on Iran, three months after pulling out of the Iran nuclear deal.

He said the US policy is to levy “maximum economic pressure” on the country.

Trump also restated his opinion that the 2015 Iran nuclear deal was a “horrible, one-sided deal”.

Meantime, the European Union has vowed to counter Trump’s renewed sanctions on Iran, including by means of a new law to shield European companies from punitive measures.