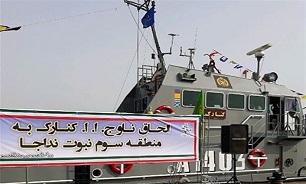 In a ceremony at a naval base in Iran’s southeastern port city of Konarak, the military vessel of the same name came into service.

The homegrown missile-launching corvette would enhance the Navy’s combat capabilities in the country’s southern waters.

In recent years, Iran’s naval forces have increased their presence in high seas to secure naval routes and protect vessels against pirate attacks.

Leader of the Islamic Revolution Ayatollah Seyed Ali Khamenei has called for the expansion of the Navy’s capabilities by making use of the country’s advances in other sectors, urging the Navy to enhance its capabilities both in terms of military gear and combat power.