Iran Hails Extension of FATF Sanctions Waiver
TEHRAN (defapress) – Iran’s Foreign Ministry welcomed the Financial Action Task Force’s decision to extend suspension of counter-measures against Tehran, describing it as a defeat for the US and its allies.
News ID: 73165 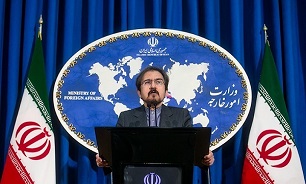 In a statement on Friday, Foreign Ministry Spokesman Bahram Qassemi expressed satisfaction that a majority of FATF members were not influenced by the political pressure from the US, which was pushing to misuse its temporary presidency over FATF to blacklist Iran with the help of its allies, the Zionist regime of Israel and Saudi Arabia.

However, Qassemi censured parts of the FATF statement, which said Iran’s measures have not met full expectations, according to the Foreign Ministry’s website.

“According to technical reports sent to the body, most of the technical measures requested under Iran’s action plan have been completely implemented and the remaining will go into effect after legal process related to the three (parliamentary) bills are completed,” he said.

“Hence, the FATF meeting was expected to take into account these realities and avoid using some negative phrases in the statement,” the spokesman added.

Qassemi also condemned the US delegation’s insistence that FATF must refuse to extend the deadline for Iran, saying the approach results from the extremist and delusional policy of the White House.

FATF’s basis for evaluating the conditions of countries has so far been their technical measures, so the group’s decisions must not be influenced by political pressures of a country that has grown accustomed to bullying and unilateralism in the international scene, he added.

“The US has shown it is not a trustworthy member of the international community as it takes unilateral moves to destroy all achievements of multilateralism. FATF members should consider this important issue when making future decisions,” he concluded.