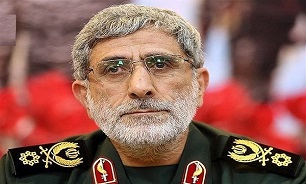 In an address to a cultural ceremony in Tehran on Tuesday evening, Lieutenant Commander of the Islamic Revolution Guard Corps (IRGC) Quds Force Brigadier General Esmail Qa’ani lauded the Ansarullah forces for their resistance in the face of the Saudi-led military campaign.

The Ansarullah forces have succeeded in achieving the technology to produce precision missiles, he added, saying Yemenis have singlehandedly made missiles with a range of 400 to 500 kilometers that can hit targets with a margin of error of 10 to 12 meters.

The Iranian general also said that the areas of Yemen that are under control of Ansarullah forces are much safer than the regions in the hands of forces loyal to fugitive former president Abd Rabbuh Mansour Hadi.

He further denied accusations that Iran in interfering in the Red Sea, saying the Ansarullah forces themselves are handling the war against Saudis.

The Ansarullah have gained such power today that they can hit any hostile vessel they want to, General Qa’ani said, adding that the US and all other powers supporting the Saudi coalition in the war against Yemen are mired in a tough situation.

In comments in June, spokesman for the Houthi Ansarullah movement Mohammad Abdulsalam said Yemen’s ballistic missiles have improved so much that the targets they can hit would surprise the enemies.

Since March 2015, Saudi Arabia and some of its Arab allies have been carrying out deadly airstrikes against the Houthi Ansarullah movement in an attempt to restore power to Hadi, a close ally of Riyadh.

Over 15,000 Yemenis, including thousands of women and children, have lost their lives in the deadly military campaign.