Yemen Army: Saudis Violate Hudaydah Truce 21 Times in 24 Hours
TEHRAN (defapress)- Yemen's army, which is allied with the Ansarullah movement, announced that Saudi Arabia and its allies have conducted 21 airstrikes on Hudaydah over the past 24 hours in violation of a truce reached on Thursday.
News ID: 74349 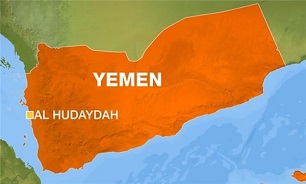 Saudi mercenaries also tried to infiltrate Hudaydah from the West coast, but Yemeni fighters foiled their attempt, he added.

"The armed forces are willing to create an appropriate atmosphere for the success of peace efforts and to end the suffering of the Yemeni people," Sare'e statd, noting that they, however, "remain prepared for all scenarios and will respond to any violations by the enemy and its mercenaries".

On Friday, one Hudaydah resident told AFP that artillery fire could be heard in Hudaydah's South, while another local in the city's Eastern edge heard an exchange of fire every 15 minutes.

On Thursday, UN chief Antonio Guterres announced that Yemen’s Ansarullah movement and the country’s former Saudi-backed regime had agreed to cease fighting and withdraw their forces from Hudaydah.

Guterres said the ceasefire agreement would see "a mutual redeployment of forces from the port and the city", with the UN playing "a leading role" there to facilitate humanitarian access.

The truce came after week-long peace talks between delegations from Yemen's warring sides in Sweden.

Mohammad Abdulsalam, the head of the Ansarullah delegation, stated that they had "made great concessions for the sake of the Yemeni people because Hudaydah is the last remaining corridor to save the country from this impending famine".

However, there is no sign that the Saudis are going to stop their aggression against the innocent people of Yemen despite the ceasefire deal, he added.

One of the articles of the draft agreement proposed by the Ansarullah delegation is “the complete cessation of military actions in Yemen”, but the Saudi side is rejecting it, he said.

Abdulsalam has called on the Yemenis to remain vigilant, especially in Hudaydah and Tai'zz, and continue supporting the Yemeni army and popular committees.

The Houthis and their allies see the truce deal a defeat for the Saudis because it stops the aggression, allows existing local protectors who thwarted the Saudi offensive to be in charge of Hudaydah, and allows the Yemeni nation to regain their access to food, medicine, and other basic supplies.

Saudi Arabia and the United Arab Emirates have deployed about 10,000 troops to Yemen's West coast after repeated campaigns to seize Hudaydah were thwarted by the Houthis and their allies.

Under the deal, Saudi Arabia will allow Yemen to reopen Sana'a airport, which was shuttered last year after numerous attacks by the kingdom.

Hudaydah, a lifeline for millions of Yemeni people, is the entry point for most of the country’s commercial goods and vital aid. The port has seen some of the heaviest fighting in the four-year bloody Saudi war on Yemen.

Saudi Arabia and the UAE launched their offensive against Hudaydah in June but they have hit a stiff brick wall in the face of a strong resistance put up by Yemeni armed forces – led by the Houthis – and the city’s residents.