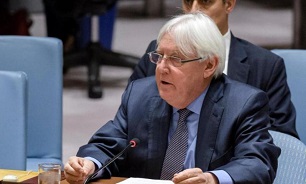 According to Yemeni TV Channel 'Al-Masirah', Griffiths' office in a statement announced that the committee started coordination as regard implementing truce agreement.

The 4th round of the UN-brokered Yemeni peace talks started on December 6 in Stockholm.

Representatives of the Yemeni National Salvation Government and the deposed Yemeni government reached an agreement on truce in Al Hudaydah port and city, As-Salif and Ayn Issa ports.

The intra-Yemeni talks which were earlier supposed to be held on September 6 postponed due to Saudis' sabotage.

The first round of the Yemeni peace talks were held in December 2015 in Geneva but the meeting produced no results.

Saudi Arabia and a number of its regional allies launched a devastating military campaign against Yemen in March 2015, with the aim of bringing the government of Mansour Hadi back to power and crushing the country’s Ansarullah Movement.

Some 16,000 Yemenis have been killed and thousands more injured since the onset of the Saudi-led aggression.

The assaults of the Saudi-led coalition forces have failed to stop the Yemenis from resisting the aggression.