Iran Congratulates Cuba on Revolution Anniversary
TEHRAN (defapress) – The President of Iran sent greetings to his Cuban counterpart on the occasion of the 60th anniversary of victory of the revolution in the Latin American nation.
News ID: 74685 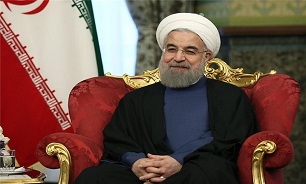 In a Tuesday message to President of the Council of State and the Council of Ministers of Cuba Miguel Mario Diaz-Canel Bermudez, Iranian President Hassan Rouhani congratulated the Cuban government and “revolutionary people” on the 60th anniversary of victory of the revolution.

“We are delighted that the Cuban government, with support from its people, has been able to withstand various plots, threats and sanctions in the process of maintaining independence and freedom for six decades, and has turned into a symbol of resistance to hegemony,” Rouhani said.

The Iranian president also wished success and prosperity for the Cuban leaders and nation.

People of Cuba are celebrating the 60th anniversary of revolution triumph on January 1.

The Cuban Revolution was an armed rebellion conducted by Fidel Castro's revolutionary 26th of July Movement and its allies against the authoritarian government of Fulgencio Batista that resulted in victory on January 1, 1959.