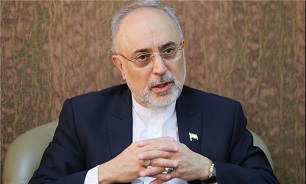 Iran has hosted an international conference on the anti-Israeli resistance of the Palestinian people in the besieged Gaza Strip.

The international event dubbed “Gaza the Symbol of Resistance,” was held in Tehran on Sunday, sponsored by the Iranian Society for the Defense of the Palestinian Nation in cooperation with Quds News Agency and the Islamic Culture and Relations Organization.

Addressing the conference, Iran's Vice President Ali Akbar Salehi said the Israeli regime only follows aggressive and cruel policies and has no fate but to collapse.

"We have no doubt that the resistance [front] will achieve victory (in the face of the Israeli regime)," he added.

He pointed to efforts made by Arab countries, particularly Egypt, to liberate Palestine and said, "These countries tried to advance negotiations and the fight for Palestine's liberation on the basis of the Arab nationalism, but they failed."

However, resistance movements, which have been founded in recent decades, have managed to form the Palestinian resistance based on the Islamic values, the Iranian official emphasized.

Salehi, who is also the head of the Atomic Energy Organization of Iran, said the Israeli regime has now influence in the US and other countries, but it would soon be defeated, because it is going astray.

For her part, Secretary General of the Iranian Society for the Defense of the Palestinian Nation Zahra Mostafavi said the conference is underway in Iran at a time that countries in the Middle East, particularly Palestine, are experiencing new developments.

"Regional equations have completely changed and the resistance front has succeeded in creating a new balance with the Zionist enemy," Mostafavi said.

She added that the US government, as the main and most important supporter of the Israeli regime, has suffered defeat in regional countries such as Iraq, Syria and Afghanistan, adding that the US-proposed "deal of the century" for Palestine was nothing but a plot, which has been made ineffective even before its implementation.

In a related front, on December 22, Iranian Parliament Speaker Ali Larijani said the criminal acts of Israel against Palestinians must be heard by the entire world, denouncing the brutalities of Tel Aviv to crack down on the oppressed Palestinian nation.

“Supporting the deprived people of Palestine is a responsibility for every conscientious human,” Larijani said in a meeting with a visiting group of Palestinian MPs.

Referring to the crimes committed by the “Zionist regime”, especially in the Gaza Strip, Larijani pointed out "the criminal acts of this regime must be heard by the entire world.”

He said disclosing and revealing the regime’s crimes against the deprived people of Palestine will provide more support to the Palestinian cause.